There is talk again of a government shutdown. This time though, it would be partial because the Congress has already funded some agencies that otherwise would need to close their doors until they got more money.

But still, we can look at what it all means since it seems to happen over and over again.

Our story starts with the federal budget. It just needs the Congress and the President to agree on spending. So the President gives a budget to the Congress. The House and the Senate have 12 appropriations subcommittees that consider the possibilities. Then all say “Yes” before October 1 and we have a budget for the next fiscal year.

The problem for the past 21 years has been that the President and the Congress don’t agree. But we cannot, for example, just stop spending on judges or highways or education. So, the stopgap measure is a CR–a continuing resolution. Call it a bridge. It spans the spending gap for an agency until it can get a formal appropriation from the Congress.  And that could be decades.

That means there are seven areas that were supposed to shut down when their CR expired on December 7. They just got a brief respite though to December 21.

Our Bottom Line: The Continuing Resolution 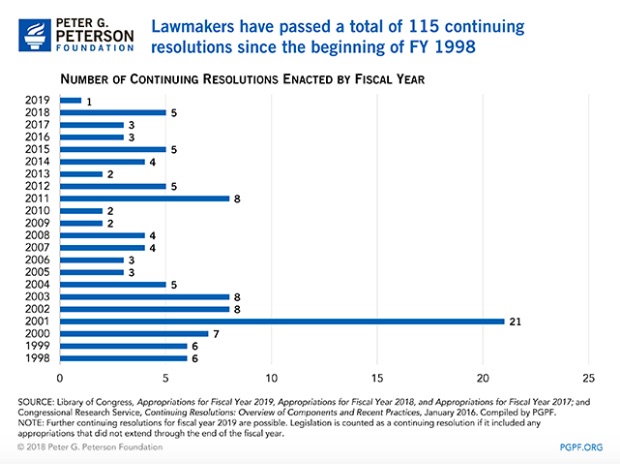 The government used to remain open if the President and the Congress disagreed about the federal budget. Yes, sometimes agencies didn’t receive their yearly appropriations. But, assuming they would soon get their money, officials ignored the lapse.

The Carter administration refused to ignore funding gaps. Their rationale was an amended version of the Antideficiency Act (1884) that said federal agencies could just spend what they were promised. If you didn’t get your allocation, then you were limited to essential activities. Only mandatory programs (like Medicare and Social Security) and those with longer term funding were not affected.

For some shutdowns, the impact was minimal while with others we had hundreds of thousands of furloughed employees. The one constant was the huge variety of issues. Abortions, foreign aid, and the deficit were only several of the causes of a congressional impasse. Right now, it’s funding for a border wall.

Discretionary spending that could be affected by a shutdown:

And it all happened when federal spending that needed annual approval did not get its CR.

My sources and more: The Peter G. Peterson Foundation had the best update I could find on the current shutdown. Add to that this Congressional Research Service report and Vox for some pretty readable shutdown basics. Finally, if you want to take the last step, econlife looked at the budget process.

Please note that the section on Jimmy Carter was in a past econlife post.