Throwback Thursday: What a Disney Princess Used To Be

In Ralph Breaks the Internet (which I saw during the Thanksgiving holiday) the women all had “attitude.” As a race car driver who loved speed and danger, the protagonist princess, Vanellope, was rather different from most other Disney princesses.

So, on this Throwback Thursday, let’s look back with some nostalgia at what a princess used to be and then look forward happily to what she has become.

Two researchers have divided the Disney princesses into three eras: 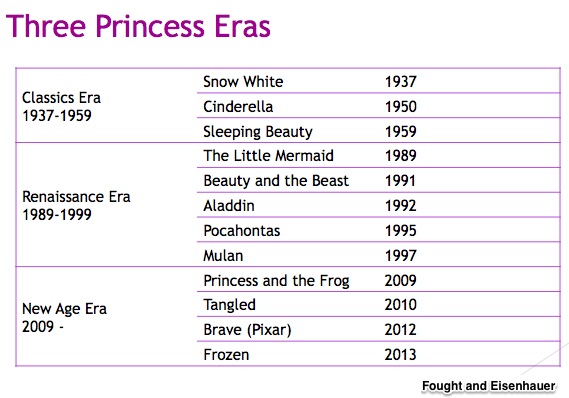 At first we had a rather attractive Snow White and then a Cinderella with few skills. After that, Sleeping Beauty (Do note her name–Sleeping Beauty) does little except get rescued (and to make it worse, the Prince kisses her when she is asleep).

With princesses that are feminine, docile, and generous, these films reflect their eras. It is all so uncomplicated. Princesses wore beautiful dresses, had gorgeous hair, and were rescued by strong men. They did not have to say a lot. Studies of the dialogue indicate the men spoke more, especially in the more recent films when the number of male characters multiplied.

Further reflecting the traits that were valued, the compliments in the films, also until recently, emphasized looks for the females and skills for the men: 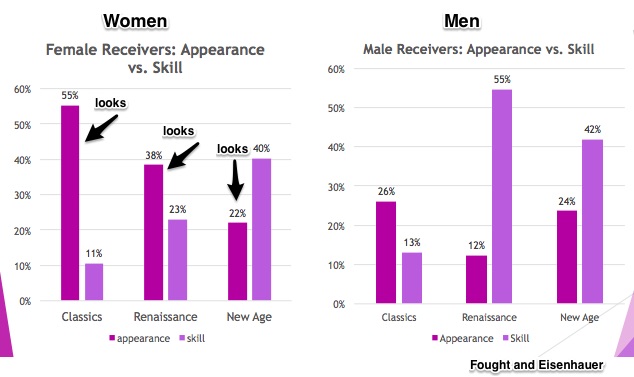 Ralph Breaks the Internet was reputedly a dilemma for Disney. Having had a “Princess Line” for decades whose brand captivated generations of young girls and their moms, they worried about a less attractive, more aggressive female. Yes, reviewing the 1989 Little Mermaid movie, Roger Ebert called Ariel a “spunky daredevil.”

But Ariel was nothing like Vanellope. In one Ralph Breaks the Internet scene, when all of Disney’s princesses are talking, Rapunzel says, “Do people assume all your problems get solved because a big, strong man showed up?” And Vanellope, the New Age princess responds, “Yes, what is up with that?”

You can see the evolution of the new Disney princess through the change in compliments: 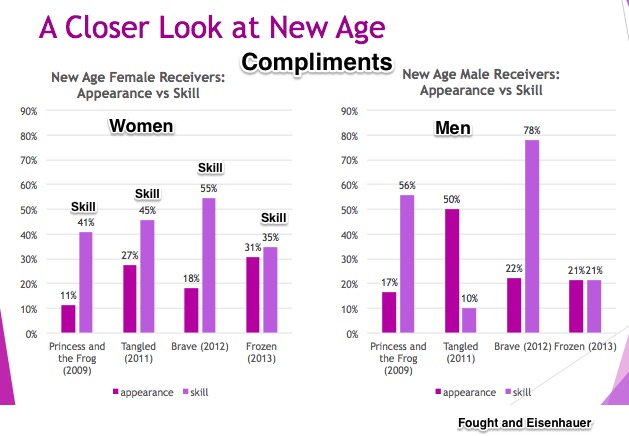 A behavioral economist might tell us that we have fewer females running businesses and government because of an expectations bias. Because of what we expect, too much of the world still assumes that women take care and men take charge.

This classic experiment is one example. During the 1960s, Harvard professor Robert Rosenthal had his class work with rats that were falsely labeled. Thinking the rats were either smart or dumb, his students did not know that Rosenthal wanted to see the impact of the labels. At the end of the experiment, they did indeed conclude that the “smarter” rats were tamer, cleaner, and more likable.

You can see where we are going. As one place that girls get their ideas about being girls, Disney movies shape what we expect elsewhere. Since what we expect can determine what we see, I look forward to many more  Vanellopes taking charge.

My sources and more: Two years ago The Washington Post looked at Disney’s princess problem and now WSJ reminded me it was time to return to it and to the original study.

Please note that a section of Our Bottom Line was in a past econlife post.

A Tale of Corn and Climate

A New Way to Score a City