As the cost of fuel rises so too do airline fees.

The cost of fuel is up:

Baggage fees are up: 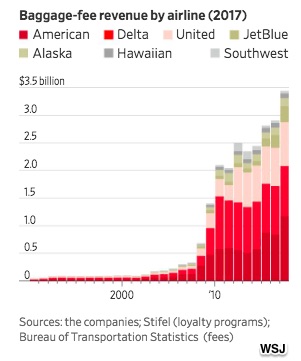 At the end of August, United Continental raised baggage fees for selected routes to $30, up from $25, a 20% hike. JetBlue also increased the first bag by $5 to $30 while asking $40 for the second one.

Change fees and boarding priority also are elevating the price of flying. At JetBlue, the change fee could be as high as $200. Meanwhile, Southwest has an EarlyBird Check-In option that lets you board first. The advantage is more seat choice and a baggage spot in the overhead bin. But you pay for it.

With loyalty and credit card programs, it sounds like win-win. The airlines get more revenue and the travelers pay less. After all, banks just need to buy miles from the airlines and then, for example, give them to their customers for credit and debit card purchases. Similarly, when the airlines offer the cards, they provide the perks to themselves.

However, there is no free lunch. Someone pays more somewhere. But the airlines do have more revenue: 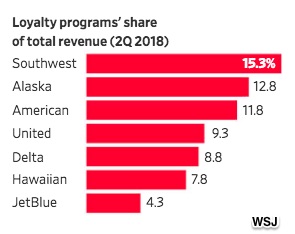 When anyone mentions airline fares, please think of a rubber band.

For some people, the quantity they demand will stretch or contract based on price. The lower the price, the more likely they buy a ticket As economists, we say that the price elasticity of demand is elastic.

You can see why elasticity returns us to baggage fees. It sort of lets the airlines have their cake and eat it too. With stable fares, airlines don’t have to worry about the elastic flier. But then, through fees they can raise their revenue.

My sources and more: The Middle Seat column at WSJ is the perfect combination of airline industry facts and good stories. As for today, the facts in this post were based on Middle Seat articles, here and here. However, there is much more in Scott McCartney’s weekly WSJ Middle Seat articles.

When Less Is More at Dunkin' Donuts

What We Say About Trade