What We Say About Trade

We’ve got a trade problem.

No, it’s not a trade deficit.

In their most recent survey of how the world feels about trade, Pew Research uncovered some unsettling contradictions.

What Most of Us Don’t Know About Trade

The good news is that almost three-quarters of all Americans think trade is good. But the bad news is that a majority does not believe that trade creates jobs, lowers prices, or increases wages: 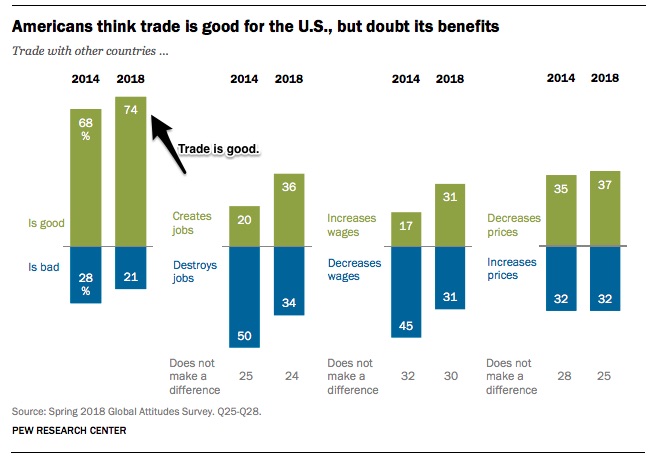 Moving beyond to the world, we find that even more Europeans think trade is good. But there also, a majority do not see its beneficial impact on jobs, wages, and prices–especially the Italians: 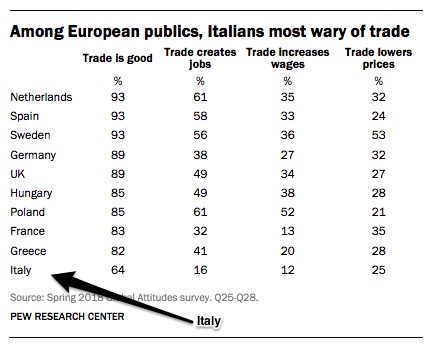 Finally, looking also at emerging economies, you can see a resounding vote for trade:

Our Bottom Line: What Would Smith and Ricardo Say?

Seeing the Pew results, Adam Smith (1723-1790) and David Ricardo (1772-1823) surely would have gathered the 30,133 people in 27 countries who answered the survey questions. Please try to imagine them in a rather large stadium, explaining why trade creates jobs, increases wages, elevates incomes, and decreases prices. 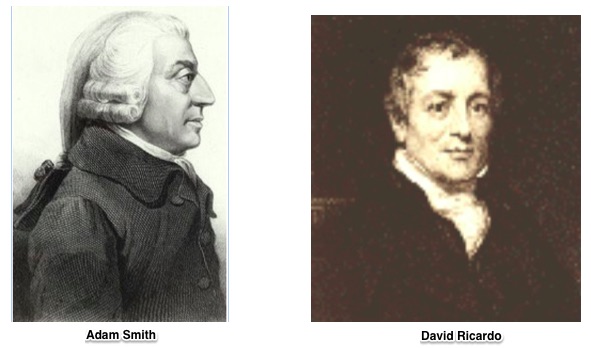 Adam Smith might first have explained that a factory’s division of labor jumpstarts mass production. However, when you produce a lot, you need more buyers. So that means you have to look beyond your local town and then your country. The ultimate result is trade because some other place sends back what it produces,

At this point David Ricardo enters the dialogue. Asked who would produce what, as you know, he would say whoever has the comparative advantage. By comparative advantage, all he meant was devoting your land, labor, and capital to whatever you do better. Then when others make what you don’t create and they too do it better, everyone is more productive.

Putting all of this together, we have the explanation that Pew Survey respondents might have welcomed. Indeed, trade helps with jobs because markets are larger. It spurs wage growth because a finite labor supply is increasingly in demand. And it lowers prices because of comparative advantage. By trading with more people, we wind up with more opportunity to specialize, more incentive to innovate, and more resources to grow.

Yes, this a vast simplification. And we know that the rewards can be uneven and inconsistent. However, they build in the long run.  We just need to manage the short run wisely and let more people know why trade is good.

My sources and more: Thanks to this week’s Trade Talks podcast for alerting me to this Pew Research on how we feel about trade. Then, for much more on a Smith Ricardo synergy, do listen to this 2010 Econtalk podcast. It is excellent. Finally, I wanted to inject even more reality with this paper from the Peterson Institute on the payoff from trade because it also had a focus  on job costs.

The Cash We Love to Stash