When Less Is More at Dunkin’ Donuts

Dunkin’ Donuts wants us think less about their munchkins and more about their coffee. So they are changing their name to Dunkin during January 2019.

They are not the only ones.

To shift our thinking from weight to fitness, Weight Watchers switched to WW. Meanwhile, Wal-Mart Stores recently became Walmart Inc. because of their e-commerce. Somewhat similarly, Apple Computer changed to Apple (2007)and Google to Alphabet (2015). My favorite though was when IHOP (International House of Pancakes) temporarily became IHOB (International House of Burgers).

Where are we going? To branding.

After blind taste tests decades ago, researchers reported that people liked Pepsi better than Coke. But then, asked to name their favorite soda, they said Coke.

The reason for the contradiction? Brand.

We know that a brand identifies a good or a service. From there though it might stir up a host of emotions that range from loyalty to excitement. Then, on the practical side, we associate some brands with high quality and reliability.

You can see how a brand has value…massive value. For Apple, it has been estimated at $184,154,000,000. Below are the top ten. The amounts are debatable but the fact that a brand makes a huge difference is not: 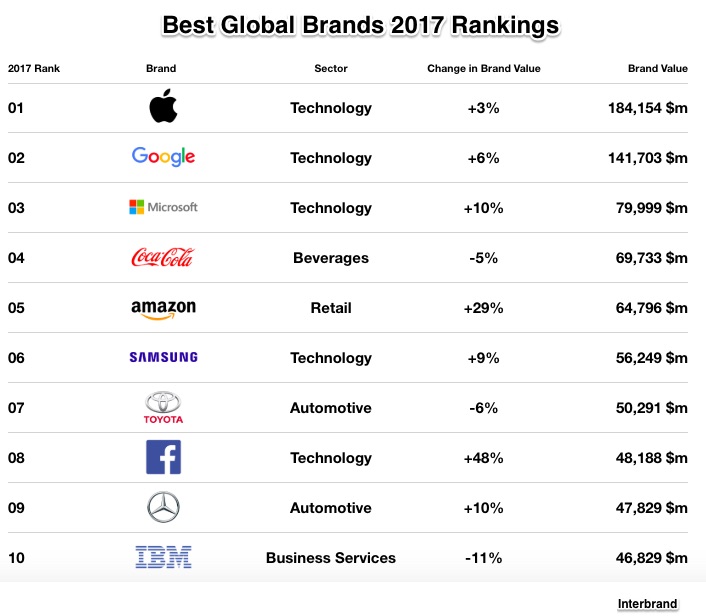 A brand gives a firm a competitive edge through product differentiation. It can become a barrier that prevents others from entering the market. Brands can even be umbrellas through which a firm introduces its new products.

What does all of this add up to?

Large firms use branding to get a competitive edge. As oligopolies, they use their brand to slide toward the monopoly tip of a competitive market scale:

Returning to where we began, you can see why Dunkin’ is trying to strengthen its brand–especially when Starbucks is among the world’s top 100.

My sources and more: CNBC had Dunkin’ facts and the NY Times had more on the firm. However, if you want to read about branding, the two perfect complements are this current report from Interbrand and this paper for the academic lens.