The U.S. Treasury tells us that the national debt was in the vicinity of $71 million in 1790. Used to fight the Revolutionary War, the money from abroad mostly came from Dutch and French bankers. Meanwhile, at home, people like you and me bought government securities.

We all expected a payback and Alexander Hamilton made it happen.

Still though, since then (except during 1835) the U.S. has been in debt. But not to worry. We’ve always paid it back and then borrowed some more.

Now, however we could have some problems. Here are the basics…

1. The deficit is different from the debt.

When federal expenditures exceed federal revenue during one year, we have a deficit. Then, to pay for that deficit, we borrow. All that we’ve borrowed to cover years of deficits minus what has been paid back is the nation’s debt.

2. We judge the size of the debt by comparing it to the GDP.

Similarly, we compare the U.S. debt to the size of the U.S. GDP (the dollar value of goods and services produced annually).

Below, you can see that like WW II, the current debt to GDP ratio is higher than 100%. Most say that the current ratio is not as worrisome as our increasing tendency to borrow more and more:

3. To fund the debt, the U.S. borrows money by selling securities.

We owe more than half of the debt to ourselves. The U.S. government lends to itself, for example, when the Social Security trust fund swaps its extra cash for bonds. In addition, individuals, businesses, state governments, local governments, pension funds–the list is long–buy U.S. Treasury securities.

The rest of the U.S. debt is held by foreign governments, businesses and citizens.

In the list of countries that own the U.S. debt, China is at the top and Japan is next. China has the dollars to buy our securities from its trade surplus with us. (When we buy their goods, we pay with dollars.) So, if the trade surplus goes down, China might not be a handy way to finance our growing debt.

Ranging from China to the Cayman Islands, large and small nations are our top 10 lenders: 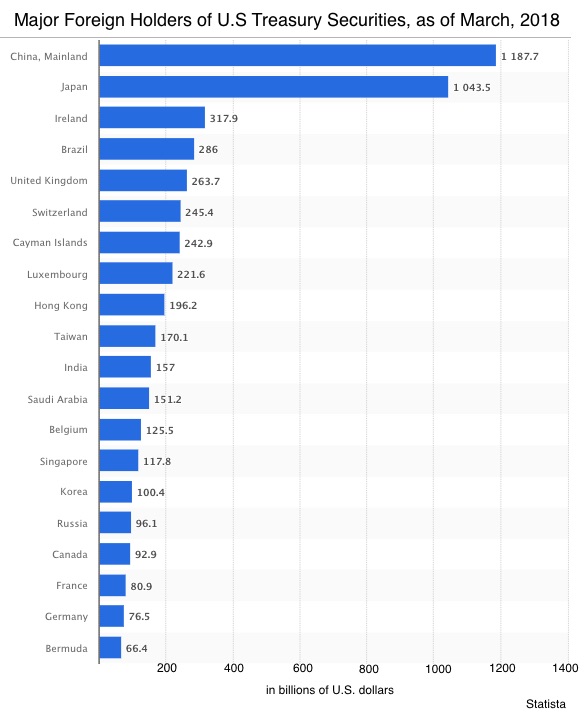 5. Interest payments on the debt are a category of federal spending (as are Medicare and Social Security, defense, highways….you get the picture.)

With federal outlays on the rise and interest rates relatively low, interest payments have been a smaller part of the federal budget.

Although it is not up-to-date, the following graph conveys an accurate message about interest payments: 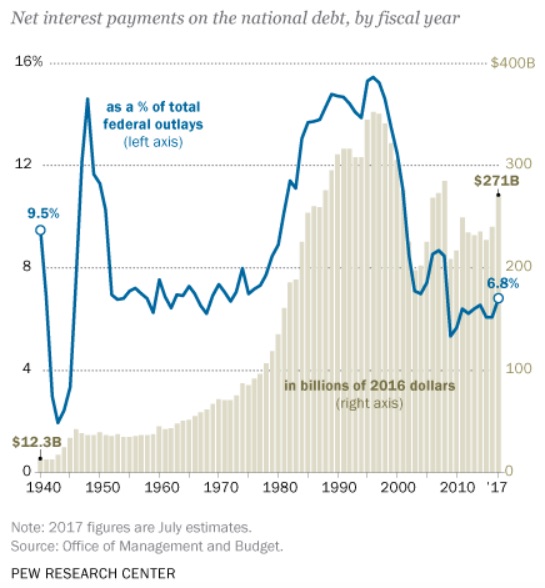 6. The debt ceiling was supposed to control the growth of the debt.

We have a debt ceiling because of a 1917 law. At the time, the Congress decided it was losing control of the volume of borrowing. To regain power over the federal purse and fiscal policy, they said the Congress would decide the maximum amount the U.S. can borrow. And, from that day onward, whenever borrowing touched its statutory limit,  they voted to raise the debt ceiling.

Right now, we have no debt ceiling. Suspended during February 2018 until March 1, 2019, there is no limit to how much the U.S. can borrow.

Our Bottom Line: The Future

With tax cuts diminishing government revenue and more spending from entitlement programs like Social Security and Medicare, there is pressure for the debt to grow.

My sources and more: For starters, this CBO report, and a WSJ summary.provide insight about the national debt. Then, for the global perspective, Bloomberg had a Q&A about China and Japan. However, if you go to just one article, do read about the history of the debt until 2012 in The Atlantic.

The Problem With Emissions Outsourcing