Assume for a moment that you are Bill Gates. As one of the founders of Microsoft, you would consider a two million dollar mortgage an easily manageable pittance. However, if you are more average, that mortgage is massive.

We could say that that the United States is like Bill Gates. It can afford a huge debt because it has a lot of income and wealth.

You can see that a U.S. debt of approximately $20 trillion looks large when compared to the rest of the world. Combined with what Japan, China, Italy and France owe, we wind up with 66% of a world debt that totals a whopping $63 trillion: 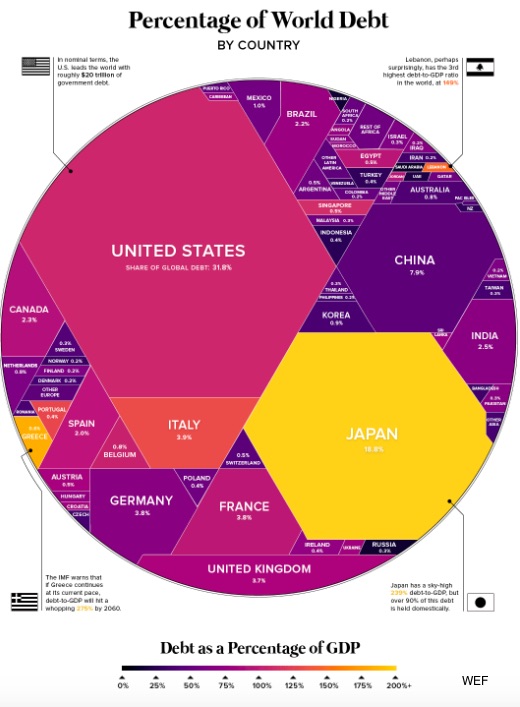 We should say though that a $66 trillion world debt is not necessarily “whopping” when we look at debt to GDP ratios. Because the ideal ratio is debatable, even Japan’s at 239.3% might not be a big problem:

But there is concern that the IMF moved the U.S. to the top of the list of projected debt to GDP ratios:

More than 200 years ago, Alexander Hamilton told us that, “A national debt, if it is not excessive, will be to us a national blessing.” Borrowing he believed let you proceed with projects that other countries would fund. And then, paying them back promptly established good national credit.

However, when a country borrows too much, its interest payments on those loans can be disproportionately large. And furthermore, if, like the U.S.,  entitlement expenses for Social Security and Medicare continue to grow, you get ever growing obligations that we call “debt creep.”

My sources and more: For starters, this CBO report and a WSJ summary provide insight about the national debt. Then, for the global perspective, this WEF ( World Economic Forum) report was ideal as was this Quartz article. Finally, if you want some analysis of Japan’s debt, FT had an interesting opinion piece.

Please note that our Bill Gates introduction has been in previous econlife posts about debt.