During the 1980s, jackets with removable sleeves were in style. It all happened because the number of jacket imports were limited by a U.S. quota. One day, one rather resourceful jacket maker decided to send an order of vests with zippered armholes in one box and a supply of sleeves in another one. Since neither vests nor sleeves were subject to any import restrictions, they poured into the U.S. Soon many of us were wearing vests with zip-on sleeves.

Like those sleeveless jackets, steel quotas can create unintended consequences.

There’s lots to decide when you create a quota:

How to divide it?

You can see that when a shipment arrives at a U.S. port, countless decisions are made. From timing to what to where, customs officials have to say yes or no. At that point, a refusal can mean the item needs to be returned or stored or destroyed. No steelmaker wants to bear that cost.

Neither do brides or sports teams.

During the 1990s, a U.S. trade administrator received frantic calls from brides and youth sports teams. When certain wedding gowns and team uniforms were blocked because they had exceeded quotas, their U.S. recipients begged her for exemptions.

Quotas protect domestic jobs by limiting the quantity that comes into a country.

In his new book, Dartmouth Professor Doug Irwin tells us that 1980s textile quotas could have protected as many as 250,000 jobs. However, when you divide the loss to consumers by the jobs protected, each of those saved jobs cost a whopping $100,000. Furthermore, those were low paying jobs that technology soon eliminated. And economist Dani Rodrik reminds us that quotas don’t create jobs. They reallocate them.

These steel jobs could be protected: 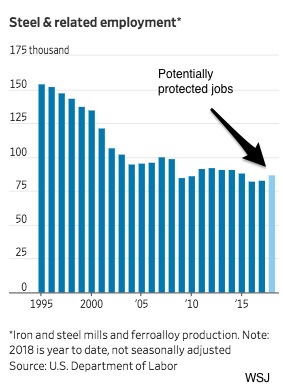 You might wonder then why South Korean steel makers steel are shipping to the U.S. The reason is price. Quotas bump prices up. For domestic producers and some foreign exporters, quotas can boost profits…

And the supply of sleeveless jackets.

My sources and more: For a quick primer on quotas, this Peterson Institute Trade Talks podcast is ideal while this WSJ article also is a possibility. However, if you have some time, Doug Irwin’s 800+ page history of U.S. trade policy is your destination.