A movie subscription plan could change your viewing habits.

MoviePass subscribers had it so cheap that a low Rotten Tomato rating barely mattered. They went to see A Bad Mom’s Christmas and Daddy’s Home 2. They went to the movies more frequently, sometimes during the middle of the week, and sometimes alone.

It is even likely that MoviePass subscriptions temporarily took millions of us away from Netflix: 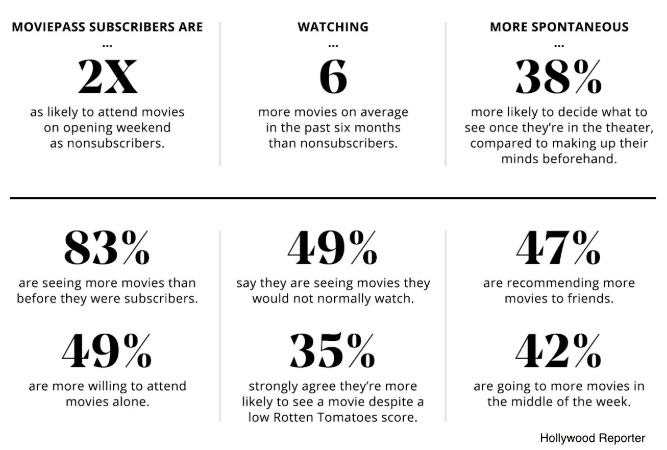 Since 2011, MoviePass has experimented with different subscription plans. They’ve  charged as little as $6.95 a month for a movie a day and as much as $50. On August 15, new subscribers will get three movies a month for $9.95 and see fewer blockbusters.

Rather like Uber, they briefly tried surge pricing that boosted what you paid for more popular films. They’ve also eliminated blockbusters when they first hit the theaters and limited available showtimes. Because some people were sharing their subscription plans (and even scalping tickets), they mandated that a single mobile device be used. They also then said no repeat movies.

Deciding what to offer, MoviePass has not quite made up its mind. The only constant has been the money they’ve been losing. MoviePass gives us bargains but pays theaters the full price. So as their subscriber numbers climbed, they were scrambling to figure out how to make money from millions of customers.

Still though, MoviePass demonstrated that there are ways to reverse industry trends. 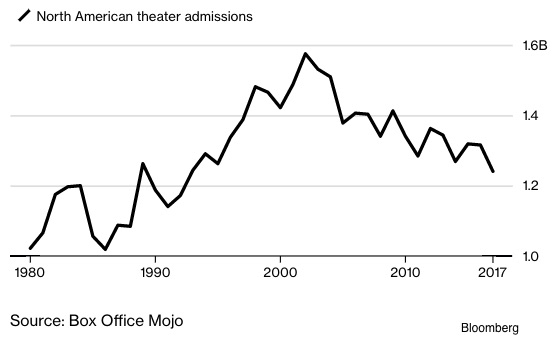 Close to 50% of the respondents in a survey reported by Statista never or almost never went to the movies: 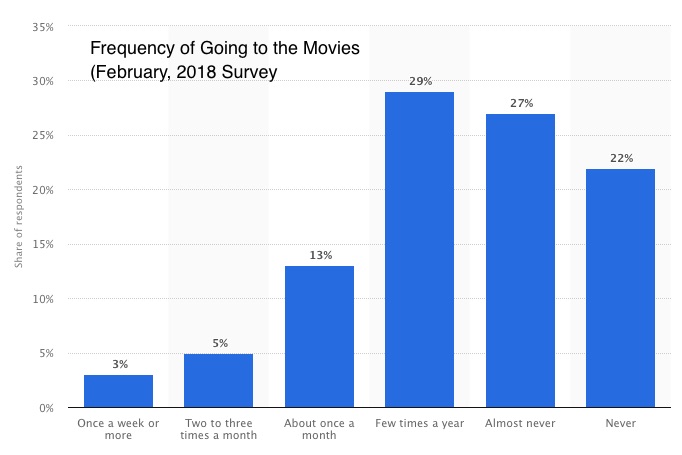 With the movie industry concerned about declining attendance, an economist might say they should look at the margin.

To grasp “the margin,” let’s assume for a moment that you need access to a parking space near where you work. You can purchase a monthly pass that lets you park as many times as you want for 30 days. Or, you can pay for a spot every time you go to work. The deal you select determines your incentives. With the monthly, it is likely you will go to work more frequently. However, with the daily, you drive less frequently because you pay for each visit.

Similarly, MoviePass changed the decisions we make at the margin. By moving that margin from each film to each month of films, it created new incentives.

Alfred Marshall (1842-1924) was the economist who first recognized the significance of the margin. He let us see that the cost of something extra is the key to understanding demand- and supply-side behavior. So we could say that Marshall helps us see that the MoviePass phenomenon is about more than lower prices. It also changed viewing habits because it moved the margins for how we purchase tickets.

Similarly, the incentives for buying music, books, and watching TV at home have changed at the margin. But those are stories we will tell in the future.

My sources and more: Thanks to the “Today, Explained” podcast and Vox for telling the whole MoviePass story. It was also ideal that Motherboard  completed the picture with its list of MoviePass policy changes. And then, the Hollywood Reporter and Bloomberg had the big industry picture.

Our featured image is from Kaleigh Rogers/Motherboard

The Jobs That Women Don't Do