Why Labor Unions Are Worried About Free Riders

On February 26, a case about required union fees was argued in front of the U.S. Supreme Court.

But the case is about much more than fees.

Our story starts with Mark Janus, an Illinois state employee. Although he doesn’t belong to a union, a $45 “agency fee” is automatically deducted from his paycheck. Given to the American Federation of State, County, and Municipal Employees, the money is supposed to be used for collective bargaining and carrying out contracts–initiatives from which all employees benefit. However, Mr. Janus says he shouldn’t have to pay because the union “supports causes I don’t agree with.”

For Mr. Janus, it comes down to a free speech (First Amendment) right that the fees are violating. On the other side we have the union saying a balance of power between labor and management is in the public interest. They also point out that court precedent supports their position.

Where are we going? To organized labor and then back to Janus.

The following BLS graphs provide a good snapshot of some union basics.

Since 1983, union membership in the private sector has plummeted: 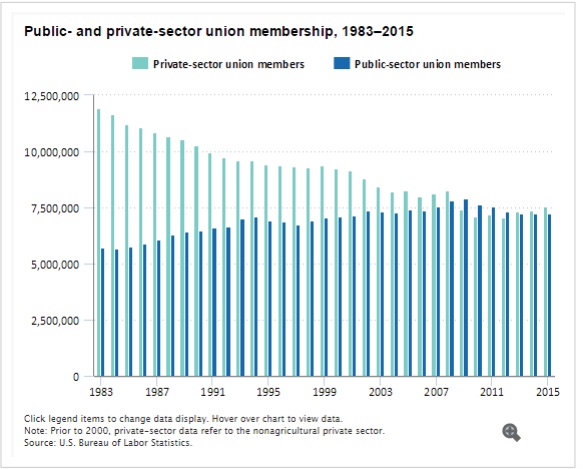 Union members have a higher median wage. However, age, geography, occupation, and other demographic characteristics affect the numbers: 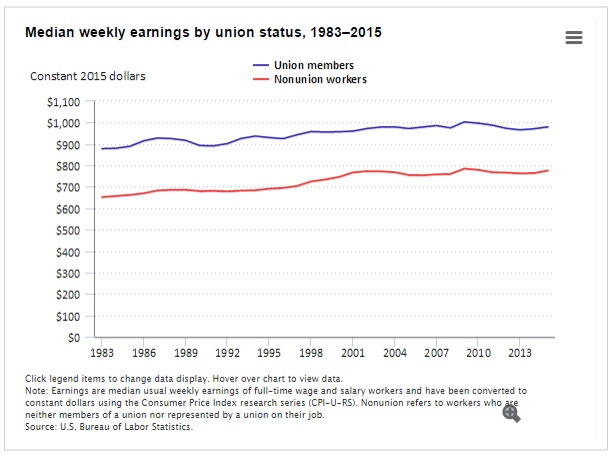 Union members tend to be older. Almost half are 45-64 years old: 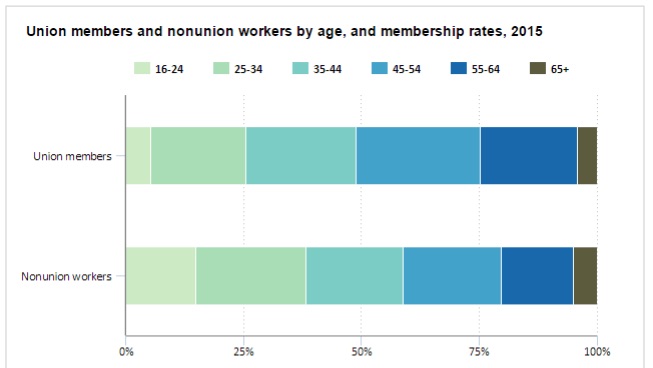 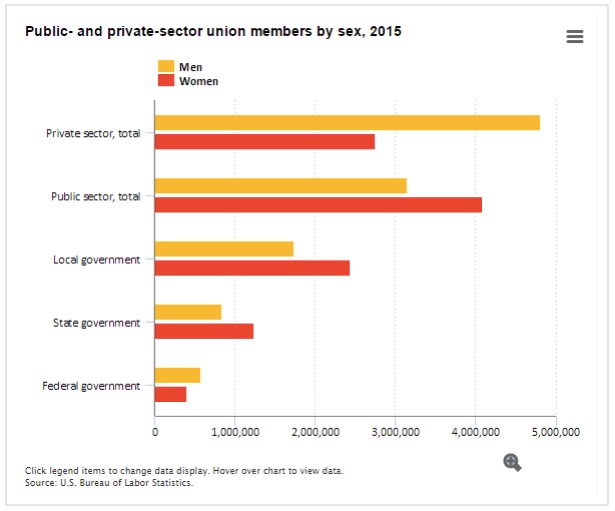 Our Bottom Line: The Impact of Janus

If the court decides for Janus (with no compromise tweaks), the result is more free riders and less power.

A free rider is the worker who did not pay the agency fee but benefited from a union contract. It is any person who leaves uneaten food in the community refrigerator at work and then enjoys the cleanliness when others neaten it. It is a family that pays no taxes but sends their children to public school. With unions, the concern is the new incentive. If agency fees aren’t required, then you have more free riders and less revenue.

And that takes us to the big issue.

Less money means diminished resources for negotiations, for lobbying, and for other union activities. Consequently, organized labor would have less of an impact on wages, pensions, political candidates and other union priorities. Some say losing Janus could be the knockout blow.

And that is why unions are worried about free riders.

My sources and more: Excellent as a partner during my morning walk, the Amicus blog introduced me to the Janus case. From there, the next logical stop was the always interesting SCOTUSblog. Then, if you want to read more, I recommend looking here for the impact of Janus on municipal bond markets, the Harvard Law Review for a surprising free rider twist, and BLS for labor facts.

Finally (as am I) you might further ponder when we should insist that everyone pay for something (taxes? healthcare?) when they disagree with how their money is used.

The Return of the Disappearing Avocado

What You Probably Don't Know About Almonds