What Men and Women Want in a Mate

According to a Pew Research survey, love tops the reasons that we marry: 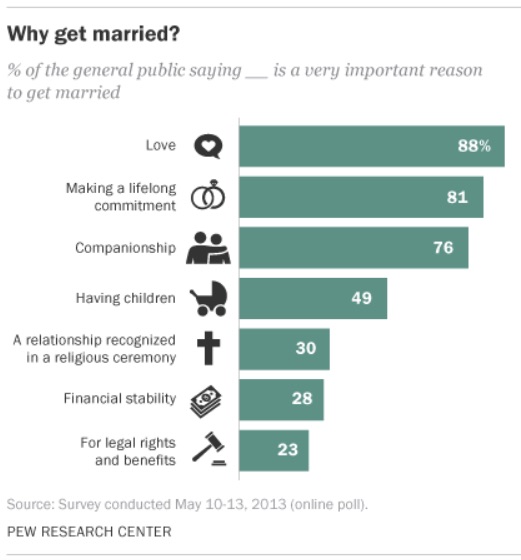 Where are we going? To what we want in a mate.

In one speed-dating experiment, researchers identified what made men and women want to see someone after they first met. The setup was simple. After four-minute interactions around a table, participants had to rate partners and say if they wanted to see them again. The ratings were based on six variables: intelligence, attractiveness, ambition, fun, sincerity, shared interests.

Analyzing the data, researchers focused on attractiveness, intelligence, and ambition. (Predictably?) Men most valued attractiveness while the women did too but not as much. For the women, it was intelligence that really mattered and economic background and race. Meanwhile, the men rejected women whose ambition exceeded their own. They also didn’t want a woman who was smarter. The women on the other hand did not care.

In a later study, the focus was similar but there was a twist. Like before, partners interacted for four minutes, noted their appraisals, and then moved onward. But here, researchers wanted to see if the sequence affected dating preferences.

For the men, it did. The data indicated that the attractiveness of the previous partner skewed a man’s perception of whomever came next. His affirmative dating decision was less likely if he considered the current partner less physically attractive than the person who preceded her.

Researchers were not sure why the same phenomenon was not true for the women.

Speed dating creates a market through which the supply of women interacts with demand from men (or the other way around).

Nobel Laureate Gary Becker (1930-2014) first introduced the concept of a marriage market during the 1960s. At the time he told us that dating behavior is not necessarily about love and marriage. Instead think utility functions. People want to marry because they expect to “raise their utility level above what it would be were they to remain single.” As a result, through the supply and demand of women and men in marriage markets, they find their mate.

Then, more recently, Nobel Laureate Alvin Roth (born 1951) provided insight about marriage markets. Bringing a new word to the discussion, he explained that marriage and mating occur in matching markets that function better if they are sufficiently “thick.” All he meant by “thick” was more transaction volume. With online dating, we have thicker markets that increase the number of matching possibilities.

On this Valentine’s Day, as economists, should we forget love and think instead of markets?

My sources and more: For Valentine’s Day, I was delighted to have discovered this Washington Post article and the Pew stats that distantly related to it. Both led me to this paper on dating preferences and this one on sequencing. They also returned me to Alvin Roth’s interview with the Minneapolis Fed. However, my one recommendation is Alvin Roth’s Who Gets What –and Why. An enjoyably readable description of matching markets, the book is the perfect way to learn about a sophisticated topic.

Please note that several sentences in this post were previously published at econlife. After publication, this post was slightly edited.

Six Facts We Need to Know About Social Security