How Your Dog is an Economic Indicator

If you live in NYC and own a dog, there’s a reasonably good chance that he’s a Yorkshire terrier named Max.

We know about Max because NY Times researchers recently looked at the city’s dog registration statistics. What they found takes us far beyond New York.

Traditionally, NYC’s Upper East side has been where the wealth and the poodles were. Now though, there has been a spurt in poodle registration from households further downtown in Hell’s Kitchen (Midtown West), Chelsea, and Greenwich Village.

In addition to the neighborhood, a poodle’s name says whether she is posh. It is more likely that an Upper East side poodle answers to Bentley or Valentino while their southerly “sisters and brothers” are Duke and Nacho: 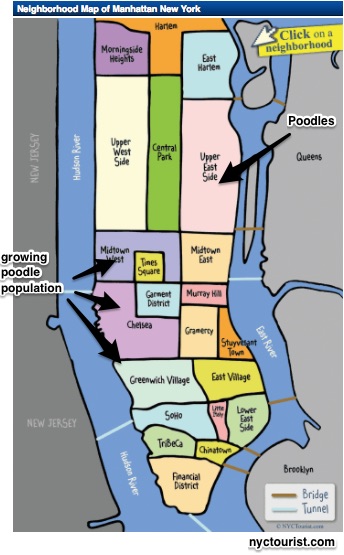 What appears to have preceded the dog migration is the rise in real estate. At $1.3 million, the median price for a home in the West Village in 2017 was more than the Upper East Side. In addition, we can look at the size of the dog. According to the Times, as housing prices rise, dog breeds get smaller. So yes, in NYC in 2016, three of the four most popular breeds were small: the Yorkshire terrier, the Shih Tzu, and the Chihuahua. However, we should note that pit bulls remain dominant in Brooklyn and the Rottweiler in the Bronx.

We could say it’s common sense that as households become more affluent, they can afford to own a pet. They can spend on the food, the toys, the healthcare, and the groomer. To confirm our logic, we can use data from the marketing research group Euromonitor. Telling us about “The State of Global Pet Care…” (2017), they say that pet care product sales are growing in emerging markets that have higher incomes and increased Westernization. The most popular products? Dog and cat treats.

So, we can add the connection between dog breeds and pricey real estate to other econlife quirky indicators that include dogs and economic growth and beer, coffee, and pecans.

My sources and more: Thanks to the NY Times for providing another quirky indicator with their pooch article.  The next step was some up-to-date facts from Euromonitor. Then, lastly, you might want to see dog and cat countries in this Washington Post. article.

Why Valentine's Roses Bloom in Colombia