In 2015, Norway’s Odd-Steinar Tøllefsen won the World Brewers Cup competition. The rules are simple. You just need to use a non-mechanical coffee brewing method and have won qualifying regional competitions.

Essentially, we are talking about pouring water (by hand) over freshly ground coffee beans in a cone-shaped filter. More art than science, the perfect cup of pour-over coffee is a combination of the right beans, the right temperature and the right technique.

Here is Tøllefsen in his Oslo coffee shop, Supreme Roastworks:

And this is his “recipe:” 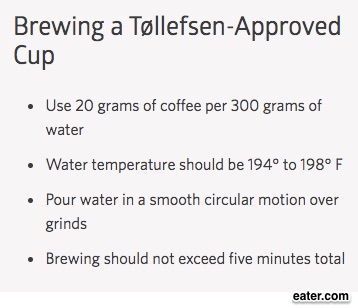 And these are the World Champs’ trophies:

Based on my experience with Philz pour-over, the taste must have been sublime. But it took time.

When I am in San Francisco, my go-to coffee place is Philz. Totally individualized, Philz coffee is only pour-over. Slowly dribbling water through a cone filled with Jacob’s Wonderbar, the barista talked with me as she filled my order. To get the intense flavor that I like, she had to do a double pour-over. It all meant a wait that exceeded five minutes not even counting my time in line. But I walked away with great coffee, a fruit muffin that tasted homemade, and good feelings about a knowledgeable barista.

Although Starbucks has begun opening “Roasteries” that emphasize the bean rather than the time, at most stores, they value speed.

Several years ago, I learned how Starbucks keeps the cars moving at the drive-thru. On a screen that has little cars and numbers, colors change from green to yellow to red. Explained to me by my barista Josh, green is excellent, yellow means you are close to the deadline, and a red light indicates the car has waited too long. The goal is to serve each customer in no longer than three minutes.

Confirming the drive-thru philosophy, in a recent conference call Starbucks founder Howard Schultz said that they were “laser focused” on cutting lines and wait times.

As economists, we can say that coffee shops compete in monopolistically competitive markets. The cost of entering and exiting a neighborhood is relatively inexpensive and the products can be identical. As a result, each shop needs to distinguish itself. One way is time. Philz competes by being slow, and Starbucks grabs us with its speed.

You can see below that there are four basic market structures. As firms move to the right along the continuum, their pricing power and size increase:

Although Philz is expanding and Starbucks is massive, still, they both engage in monopolistic competition at neighborhood stores.

My sources and more: Thanks to WSJ for yesterday’s article on coffee.  As a person who cares about my coffee beans, it was fun to explore the pour-over world.  Always my destination for food questions, eater.com had the world championship barista story. But I could not stop there and wound up at the World Brewers Cup website. I recommend looking at past winners and ranking.

Please note that i described the Starbucks drive-thru previously in a past econlife post.

What an Economist Would Buy at the Salad Bar

Can Shoveling a Parking Spot Make It Yours?