When the stars of All the Money in the World were summoned to do some reshoots, their response could not have been more different.

Maybe that contributed to the problem. But not really. There is so much more.

At $80 per diem, Michelle Williams was paid less than $1,000 for doing the All the Money in the World reshoots. Mark Wahlberg got the same per diem plus $1.5 million. The math? The woman received less than one-tenth of one percent of what her male co-lead got.

Because of a Christmas release date, filmmakers wanted to act quickly after Kevin Spacey–accused of unwanted sexual advances– left the film. Ms. Williams reputedly rushed to the shoot. Sounding rather gracious, she told USA Today, “I said I’d be wherever they needed me, whenever they needed me. And they could have my salary, they could have my holiday, whatever they wanted. Because I appreciated so much that they were making this massive effort.”

Mark Wahlberg though is reputedly a tough negotiator.

For some insight about Hollywood’s gender pay gap, let’s return to an updated version of an econlife post from last year. Doesn’t Jennifer Lawrence sound remarkably similar to Michelle Williams?

Lawrence also had been paid less than her male co-stars–although not nearly as much. Ms. Lawrence said that during salary negotiations, “I didn’t want to seem difficult or spoiled.” Later though, she “saw the payroll on the internet and realized every man I was working with definitely didn’t worry about being difficult or spoiled.”

The Williams and Lawrence pay gap, though, is part of a much larger story.

In Front of the Camera

The first place to find the gap is in front of the camera. Led by Dr. Stacy Smith, a group at the USC Annenberg School periodically checks the percent of female speaking characters. For four media platforms, they concluded that the average ratio was 2 men to each woman. With film at 2.5 to one, it was worse.

These are the numbers from “Inclusion or Invisibility? Comprehensive Annenberg Report on Diversity in Entertainment” (All of the following graphics unless otherwise indicated are from this paper.): 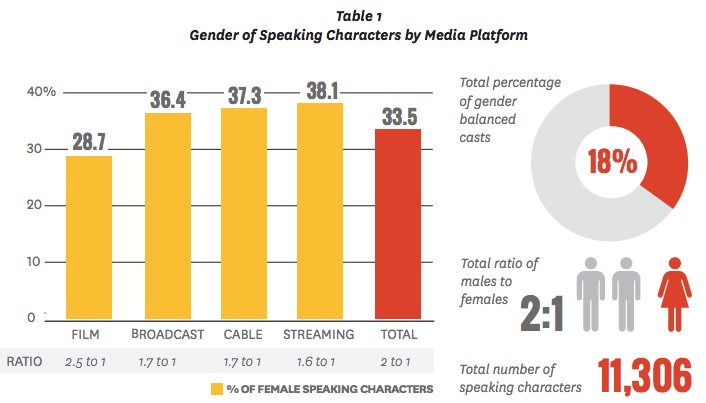 One reason for fewer women in front of the camera is the men who are behind-the-scenes. Among the media’s directors, women are far outnumbered: 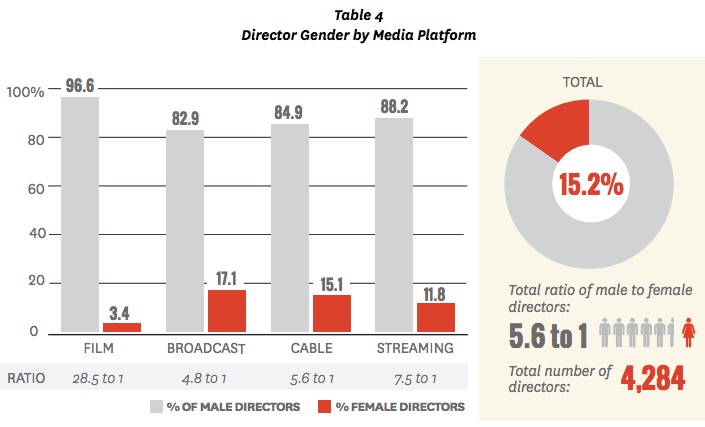 However, when women make the movies, those “invisible” females appear: 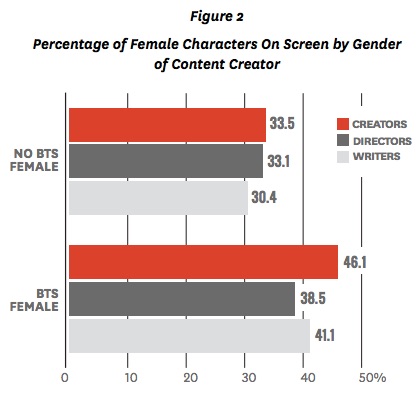 As behavioral economists, we could say that we have an expectations bias. When industry leaders imagine a director or a blockbuster film, they think of men.

Dr. Smith suggests we can start to erase that bias by gradually adding women to scripts:

I suspect that when more media industry women populate a behind-the-scenes pipeline, so too will their salaries.

My sources and more: Seeing that Michelle Williams was paid so much less than Mark Wahlberg reminded me that Annenberg’s Stacy Smith would have an updated study. It was time again to take a look. Although there are no surprises, it is interesting to see the newest Forbes list.

Meanwhile, last year I recommended this gender gap podcast from More or Less and this TED talk from Stacy Smith. Finally, to complete the picture, you might enjoy this fivethirtyeight article.

How to Solve the Missing Chips Problem