The Economy Where Black is Banned

Turkmenistan’s President Gurbanguly Berdymukhammedov lives in a white palace and travels in white limousines. Known as “the city of white marble, his country’s capital city holds the world’s record for concentrated white marble buildings. In fact, Berdymukhammedov is so convinced that white brings good fortune that he has had black cars removed from the roads in the capital.

Where are we going? To command economies.

During the 1790s, Alexander Hamilton expressed the importance of sticking to a contract. When a contract is signed, a system of law needs to serve as a backup. It needs to guarantee that the state will preserve the agreement. Only then can an economy function dependably and prosperously.

In Zimbabwe, after Robert Mukabe seized power, he nationalized the property possessed by a white minority. Black farmers received it, farmed the land, and assumed they owned the property. Then several years ago, for personal gain, he has repossessed some of that same land and given it to his family.

Rather than a predictable rule of law that resembled Hamilton’s preference, Zimbabwe law comes from a powerful ruler. Typical of a command economy, what Mugabe did is reminiscent of President Gurbanguly Berdymukhammedov. Whether it’s black cars or land, an ownership right is being ignored.

If you look at the Index of Economic Freedom, the lowest ranking countries are predominantly command: 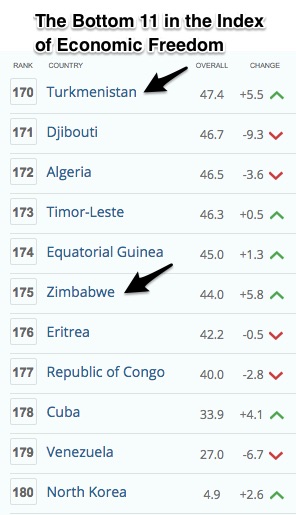 As economists, we know that command is one of three basic kinds of economic systems:

Instead though of imagining three different systems, we can picture mixtures. While in the U.S. we primarily have a market, we can throw in government mandates and a bit of tradition too.

Returning to where we began, Turkmenistan is the perfect example of command when its leader impounds black cars…just because he wants to.

My sources and more: After reading about Zimbabwe yesterday in the NY Times, I recalled Turkmenistan’s leadership. You might want to continue (as did I) with Human Rights Watch if you want more about Zimbabwe.

The Shocking Amount of Electricity That Bitcoin Consumes