The September 30 to October 2 shutdown in 1982 started because the Congress and President Reagan “had other plans.” When the fiscal year ended on Thursday September 30, the House and Senate had agreed on a compromise. But because of a White House barbecue for the Congress and a Democratic $1,000 a plate fundraiser, there was no late night session. On Friday, the government shut down.

The government used to remain open if the President and the Congress disagreed about the federal budget. Yes, sometimes agencies didn’t receive their yearly appropriations. But, assuming they would soon get their money, officials ignored the lapse.

The Carter administration refused to ignore funding gaps. Their rationale was an amended version of the Antideficiency Act (1884) that said federal agencies could just spend what they were promised. If you didn’t get your allocation, then you were limited to essential activities. Only mandatory programs and those with longer term funding were not affected.

For some gaps, the impact was minimal while with others we had hundreds of thousands of furloughed employees. The one constant was the huge variety of issues. Abortions, foreign aid, and the deficit were only several of the causes of a congressional impasse.

Do note that the shutdowns were caused by the “Appropriations Funding Gaps” in the following table. Also, the beginning of the government’s fiscal year is different from the calendar year: 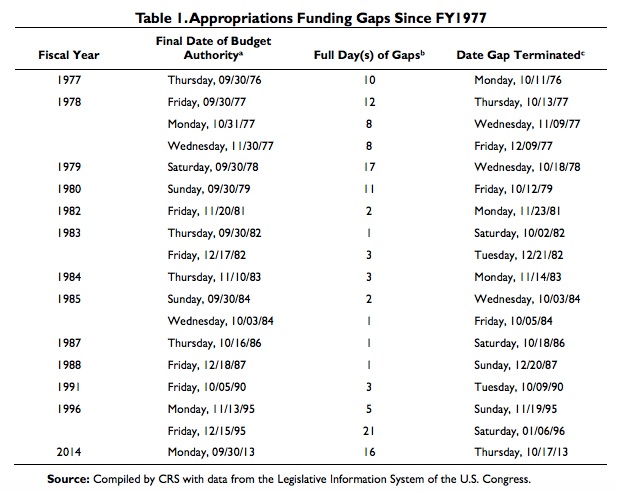 The cost of a shutdown is tough to measure. Government revenue declines from closed national parks and tourism sites. Safety could be a problem when the Environmental Protection Agency and the Food and Drug Administration cancel inspections. Add to that mortgages that aren’t approved because the IRS halted income verifications. Think about the airlines, hotels, and wedding planners that lose business. And don’t forget “non-essential” government statisticians. During the 1995-1996 shutdown, the December employment report came out during mid-January.

Returning to the 2018 shutdown, you can see the cost is incalculable.

My sources and more: Vox had the perfect story of all 18 shutdowns if you want the details. Meanwhile, I found the ideal complements at CRFB’s cost discussion and from the Congress. However, if you just read one article, I recommend the NY Times story of the 1982 funding gap.

The Economy Where Black is Banned