The Travels of a Cashew

We seem to be going nuts for cashews.

You can see below that the U.S. and India are eating the most. We like our nuts as a snack, in protein bars and as cashew milk. In India, a growing middle class consumes cashews in cakes and sweets at festive occasions. 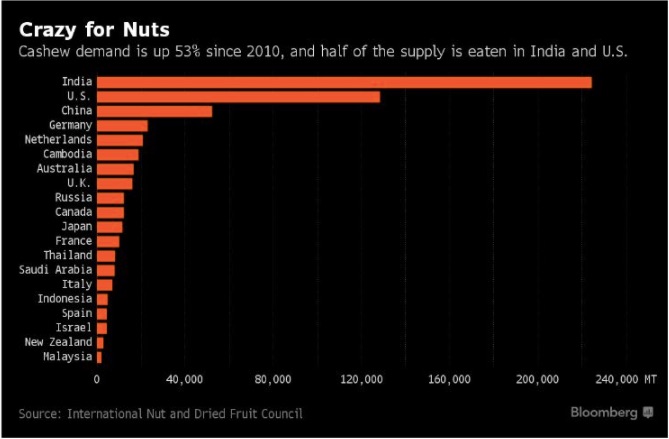 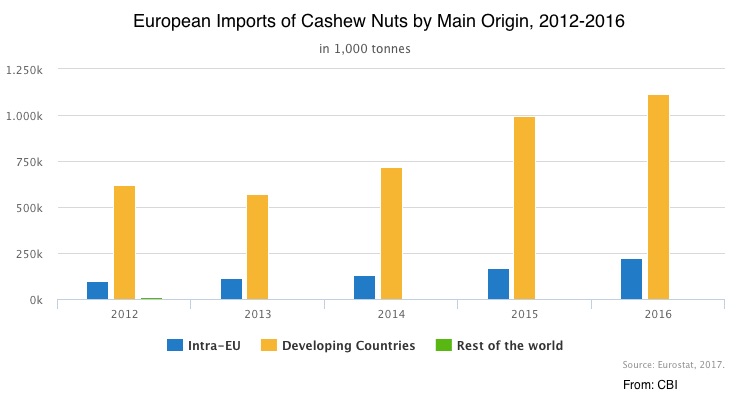 But these graphs do not tell the interesting part of the story.

The Journey of a Cashew

We better start by just explaining what we mean by a cashew. Usually a seed is inside a fruit. For the cashew, though, the seed hangs from the bottom of a swollen stem called the cashew apple.

Although you just look at a tree for 2 minutes, this video is interesting:

Our story starts in Brazil and ends in Africa. During the 16th century, Portuguese explorers from Brazil brought the cashew to India and East Africa. For centuries, the trees were used to control soil erosion.

But then, during the 1920s, General Foods realized that Indian cashews could become popular in the U.S. They had the raw cashews removed from their shells in India and then roasted and packaged them in Hoboken N.J. By the 1970s, the Indian city of Kollam had a major industry. As a processing center, it supplied the world. And the world gave back jobs and amenities like the city’s theater and library. All from cashew money.

After a peak in the 1990s, India’s cashew dominance subsided when Vietnamese business people realized they could do it better. Whereas India’s factories were labor intensive (and government wanted to retain those jobs), the Vietnamese developed equipment that mechanized processing. Cashew production that used to require 2000 people (primarily women) now employed 170. You can see what happened. The Vietnamese were able to produce more with less.

The result? This graph says it all: 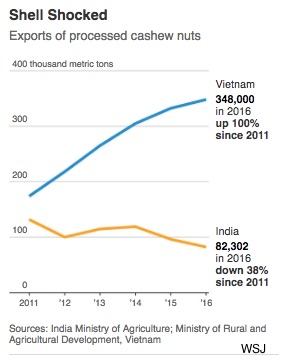 And you can see where Europe’s nuts are coming from:

But the journey is not over. At this time, it appears that African nations are ready to move in. In 2015, West Africa was the source of 46% of the world’s cashews. Although those cashews were primarily processed in Vietnam, India and Brazil, perhaps not for long. African governments and entrepreneurs now are looking at becoming processors.

Our Bottom Line: The Power of the Market

Years ago, I had the opportunity to ask former Secretary of the Treasury Lawrence Summers a question. As he walked in one direction and I in the other, I waited for our paths to cross and then said that I taught economics and wondered what he thought was the most important idea my students could learn. Barely pausing, he said, “the power of the market,” and continued onward.

Reading about the travels of the cashew, I thought about how “the power of the market” propelled them around the world.

My sources and more: From this WSJ article, you can see the dominance of Indian cashews but I needed this look at Europe, and Bloomberg for the whole picture. Then, for the African side of the market, this Project Syndicate discussion article about Mozambique has some history with more current facts from the cashew nut project in Zambia, and this story about Kenyan cashews.

Please note that today’s Bottom Line was published in a past econlife.