But even with marriage becoming less popular, it still influences the gender pay gap.

In 2014, Pew Research reported that one in five adults ages 25 and older have never been married. On a gender basis, 23% of men and 17% of women are unmarried.

When looking at education, we also see different marriage rates. It is more likely that an individual with a college degree will be married than someone who had no college experience after graduating high school: 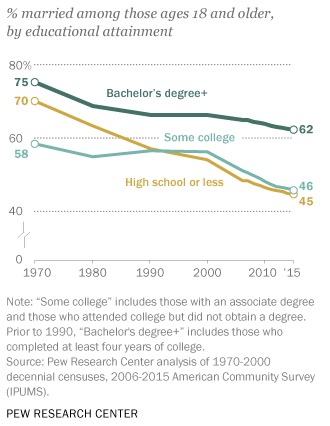 Education and the Gender Pay Gap

That dark green line (above) in the Pew graph for college degrees takes us to the gender pay gap. Recent research indicates that highly educated married women experience the largest male/female pay gap. At first, female college graduates earn 90% of what their male peers earn. Then, for women in their late 20s (when they have children) the gap widens considerably. By the time they are 45, it has reached 55%.

With less educated women, the gap grows to 28%. However, the difference is smaller only because their male peers earn much less.

By contrast, there is a similar earnings path for married and unmarried men.

We are underutilizing and under rewarding married women. To use their human capital more extensively and equitably, we can look to firms and to government. But let’s save that discussion for another day.

For now, we can conclude with the Frank Sinatra song that said “Love and marriage go together like a horse and carriage.” So too do marriage and the gender pay gap.

My sources and more: Thanks to the NY Times Upshot for alerting me to Claudia Goldin’s newest research. Her (and her co-authors’) paper was the perfect complement to Pew’s report on marriage from 2014 and census data.

Why Shoot-out Kicks and Bread Machines Can Be Similar

A Surprising Way to Ration Education