One Saudi prince reputedly purchased 80 seats (in coach) to transport his falcons: 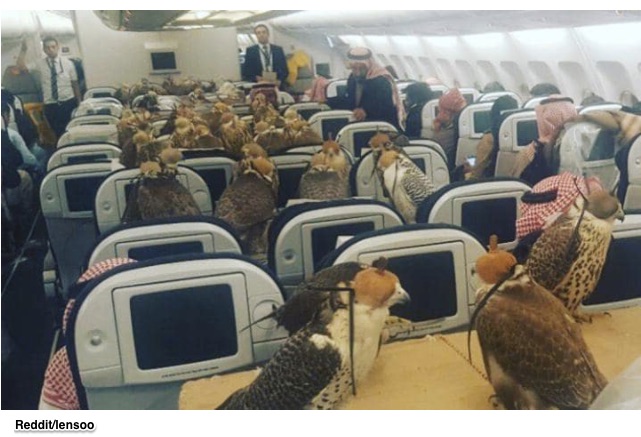 Meanwhile, visiting Japan during March, the Saudi king traveled with 10 (or so) princes 10 Cabinet ministers, maybe 1000 other people and 500 tons of luggage. Reserving whole floors, the delegation booked approximately 400 limousines and 1200 rooms in luxury hotels. 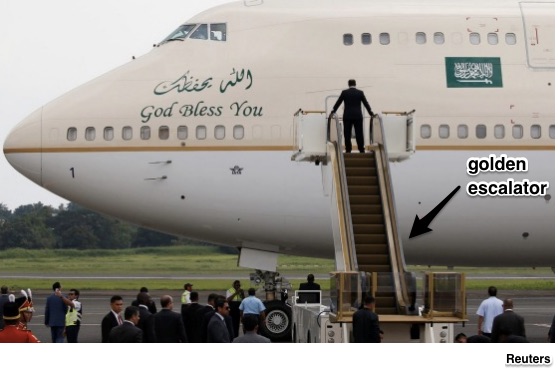 With 90% of the Saudi state budget coming from oil revenue, the government sped up its plans to diversify when the price of oil plunged. Their goal is a sixfold increase in non-oil government revenue by 2030.

The money for the diversification is coming from a newly created sovereign wealth fund worth close to $2 trillion. Primarily targeting ABO (anything but oil), the King and his representatives met with dignitaries from Asia, the U.K and the U.S. to consider the investments. The possibilities ranged from infrastructure in the U.S. to medicine and renewable energy in Japan.

What they could buy with $2 trillion:

Oil exporters’ dependence on the oil industry is a reminder of what a commodity boom can do to an economy. Essentially, that commodity takes over. It eliminates other industries, boosts government revenue and social welfare spending. When the boom turns to bust, there are no replacement industries to fill the void, government money dries up and the source of consumer spending and incomes contracts. It happened in the Netherlands during the 1960s and ’70s (hence the name Dutch Disease).

The Saudis hope that $2 trillion will cure their Dutch disease.

My sources and more: Today, I started with the falcon photo. Perfect as a springboard for Saudi wealth, the photo took me to the Japan visit. The next logical step was the reason for the Japan visit and the Saudis’ plans for diversification that were described by Bloomberg and WSJ. More specifically, FT looked at how the money would be used in the U.S.and Japan Times, at Japan.

Our description of Dutch disease was previously published in an econlife post.