The Upside of Uber’s Surge Pricing

An Uber economist tells us that people are more likely to schedule a ride during a surge when their cell phone battery is low.

Where are we going? To the supply side of Uber.

A typical taxi cab driver behaves somewhat differently from an Uber driver when it starts to rain. The cabby most likely had a goal for the day–perhaps $200. Especially when the weather gets bad and the driving is dismal, the cabby will call it a day when he hits the right number. At the same moment an Uber driver will go to his app. Hoping for surge pricing to set in, he stays.

A similar phenomenon works its magic on drivers at other unpopular times like early mornings and late nights. Because those times disrupt family life and sleep, drivers are not pleased.

Below, you can see how much most people are willing to spend when a surge kicks in: 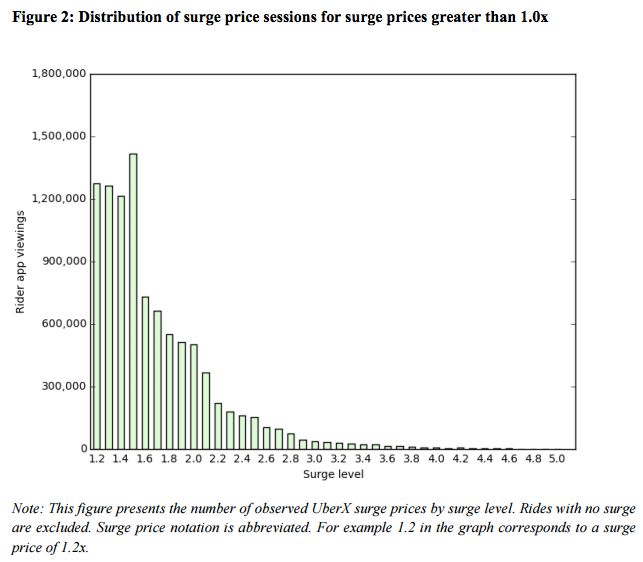 And that is how surge pricing does its job. When more people want a ride, Uber provides its drivers with the incentive to provide one.

Our Bottom Line: The Law of Supply

On the supply side, an Uber driver can have considerable overhead. One driver explains that he keeps snacks and magazines in his Honda Odyssey minivan. Wearing a suit, he opens doors for his riders. With costs that include insurance and a list of ancillary expenses, $300-$400 in weekly expenses can eat up one half of his earnings. So he searches for surge opportunities throughout the day and night.

As economists, a traditional demand and supply graph says it all. Let’s say that it starts to snow. We have a shift in demand that takes it higher on the supply curve. The result is an increase in quantity supplied. 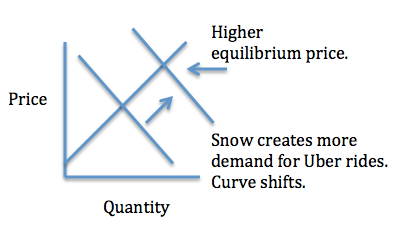 Translated into real life Uber, that movement in demand up the supply curve means more drivers.

My sources and more: Classic supply and demand, Uber’s details on drivers confirms the supply side response. A complement, this Quartz article and NPR interview tell when we will pay for a surge through its psychology. Meanwhile, using an academic lens you can see more about elasticities and consumer surplus.

There's Lots More To the CPI Than One Number