There’s Lots More To the CPI Than One Number

Where are we going? To a closer look at the CPI.

Some prices go up and down frequently while others just stay the same. Take strawberries. Depending on the weather and the season, their price fluctuates considerably. However, a hamburger and fries at McDonald’s seem to keep the same price for awhile.

Concerned about the different ways that prices behave, several Federal Reserve economists classified them as flexible or sticky in 2010. While online sellers have certainly changed some of their data, the table gives meaning to the FRED graph that follows them: 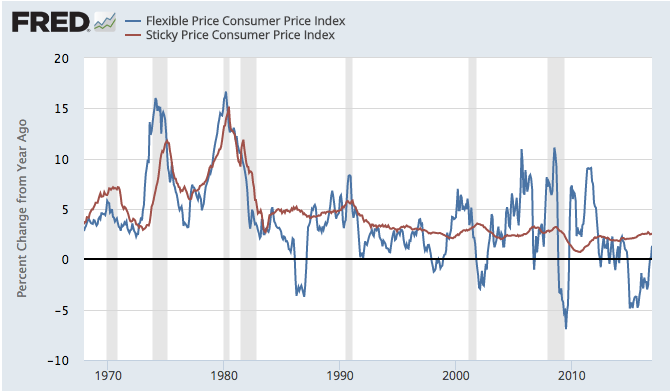 Our Bottom Line: The Value of One Statistic

The CPI provides signals about the economy. By knowing price changes, the government can adjust Social Security payments to maintain purchasing power. We can see if our paycheck is keeping up with the cost of living. And the Federal Reserve can decide whether prices are rising so quickly that it needs to brake the trend. Yes?

All prices do not behave in the same way and neither do all indices. We have the CPI but also a core index for the CPI that excludes more volatile (flexible) food and energy prices. Also, there is a CPI for the elderly.

Then there is the Personal Consumption Expenditures (PCE) that the Fed looks at for its inflation conclusions and the Billion Prices Project if you prefer instantaneous data collection rather than the delayed system from the BLS.

So where are we?

China and Nepal used to disagree about the height of Mount Everest. Nepal counted the snow caps while China just included the rock height. Consequently, Nepal said the peak was 4 meters higher than China. Then, in 2010, China said okay, the official height of Mount Everest, at 8,848 meters (29,028.9 feet), will include the snow but we won’t ignore the 8,844 meter rock height. I should add that the mountain is probably higher now because shifting continental plates are easing India under China and Nepal.

Where are we going with this? There is lots more to a statistic than one number.

My sources and more: H/T to marginalrevolution for alerting me to politicalarithmetick. A new blog, politicalarithmetick makes government stats interesting and was perfect for inflation info links, here, here and here. But, for a pleasant interlude, I recommend this Planet Money podcast on the price of Coke.

The Upside of Uber's Surge Pricing

Where To Find China's Missing Women