One bottle of Merck’s cancer drug Keytruda can cost $2,500 and Novartis’s Gleevec, $9,000. Sloan Kettering physician Peter Bach says cancer drugs are so expensive because their price mechanism is wrong.

Where are we going? To deciding when to ignore the market.

At abacus.org, a Sloan Kettering Cancer Center website, we are told that we should replace “the price a company charges” by a price “based on value” that you and I determine. Their value variables include the following:

This is how they calculate price:

Described in Adam Smith’s Wealth of Nations (1776), the market needs to be left alone for supply and demand to function productively. On the supply side we have an upward sloping curve that is shaped by cost. Implying more cash and perhaps more profit, a higher price provides the incentive to produce more. Meanwhile, on the demand side, we have a downward sloping curve through which quantity declines as price rises.

As you can see below, when we have less supply, normally the movement on the demand curve elevates price and diminishes quantity demanded. 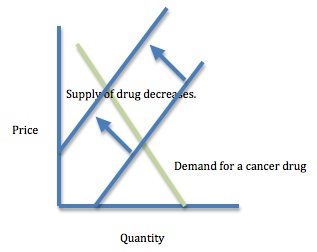 But not with drugs.

In drug markets, the demand curve is almost vertical. An almost vertical line says that a change in price has little impact. Called inelastic demand, it just shows that certain drugs are necessities. 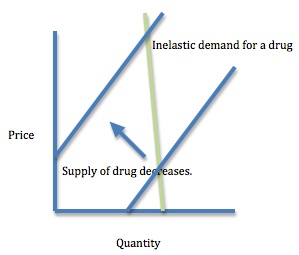 Ands therein lies our dilemma. No real market to depend on but how then to price drugs?

In an Adam Smith world, there were many small and relatively powerless sellers and buyers interacting to determine an equilibrium price. By contrast, for cancer drugs, there are few sellers or even just one for each cancer drug. Meanwhile the demand side is dominated by Medicare, private large insurers, and Medicaid.

Consequently, the supply and demand side incentives that create an equilibrium price in a market are distorted by big groups of sellers and buyers who have pricing power.

So yes, we have a distorted marketplace for expensive drugs like those for cancer.

I doubt that the solution is to use demand side opinions on value as a pricing mechanism.

An Unintended Consequence of Football Helmets