The results of dynamic tolling appear to be surprising the Florida Department of Transportation.

Alone in your car on Florida’s I-95, you no longer have to remain in slow moving traffic. For a price, you can enter a HOV (High Occupancy Vehicle) lane because it became a HOT (High Occupancy/Toll) lane.  What you pay all depends on the traffic. Below, you can see what happened when price touched its $7 ceiling. 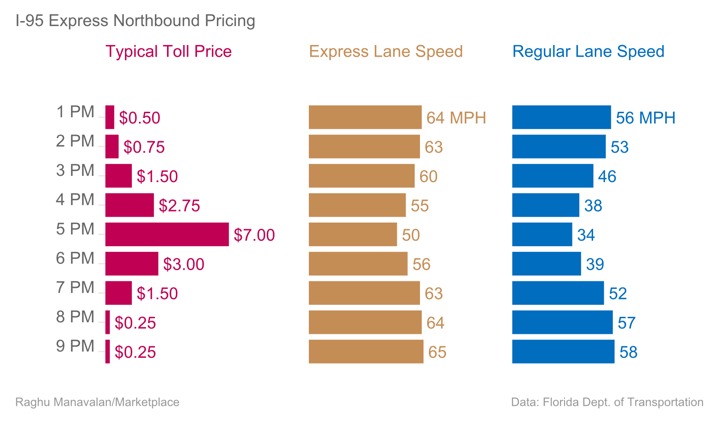 During rush hour, cars were driving only 50 MPH in the HOT lane. Was $7 too low? Had the HOT lane become too popular?

An economist might say that the $7 ceiling was located too far below equilibrium. As with all ceilings, there was too much quantity demanded and too little quantity supplied. In other words, there was  a “shortage” of fast lane space. I wonder if, by now, the Florida Department of Transportation has raised or eliminated the ceiling. Then also, some price elasticity would kick in with people buying much less because of the cost increase.

On the other hand, people have suggested that the higher price has made the HOT lane more attractive because of the elite message it conveys. Could the HOT lane be a Veblen Good with an upward sloping demand curve that violates the law of demand?

Sources and Resources: H/T to a Marketplace podcast for alerting me to Florida’s dynamic pricing and for their graph. I did need to look at Florida’s DOT report for the details. As for Veblen goods, econlib is always good for its explanations.

Please note that the Veblen sentence in this post was corrected.

Would You Share Your Tuition, Your Income and Your Grades?