Would You Share Your Tuition, Your Income and Your Grades?

When are you willing to share what you have earned?

While the yearly sticker price for Duke, Harvard or Wellesley is close to $60,000, not everyone pays it. At Wellesley College, close to 40% of all students pay full tuition; for Duke, maybe 50%. At Harvard, if your family makes less than $30,000 (2010-2011), the yearly cost for tuition, room, board and fees was $1,300 or less. The result? What the more affluent pay is redistributed to others. Those who pay full price take care of a larger proportion of the university’s budget. 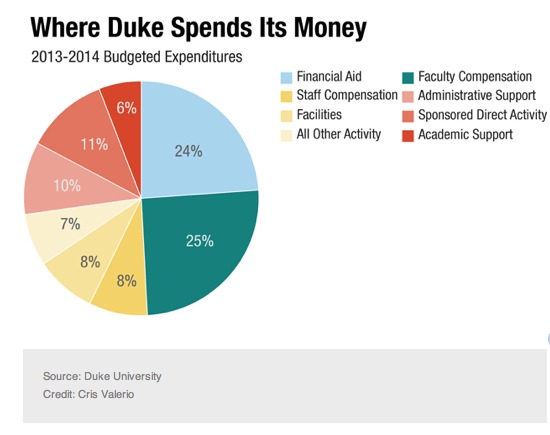 Looking at the numbers from the Congressional Budget Office for 2010, you can see that the top quintile paid more than 90% of all income tax dollars. Within that total, the top 1% provided close to 40% of income tax revenue. Similar to college tuition, dollars from those who are more affluent are in a common government pot from which they are redistributed to everyone.

Again, we are considering redistribution but this time people say, “No.”

In the following video, when asked if those in the top 10% of GPAs should have their grades redistributed, college students said, “No.” Even when reminded that  that some of their peers had lower GPAs because they had to work and others with less ability were struggling and might not graduate, all of the high grade “earners” refused to give a little of their GPA to others.

Sources and resources: With podcasts on college tuition multiplying recently, during my walks, I particularly enjoyed (as always) what NPR’s Planet Money had to say (and their above graph) and Freakonomics. Then, for more of the facts, I recommend this Economix entry and a CBO report on taxes.

The Unexpected Impact of Changing Times