Sort of like coach or first class, most of the chickens that lay our eggs live in a battery or a colony cage.  In the typical cage called the battery, a chicken has 67 square inches. By contrast, colony cages are spacious enclosures. Equipped with perches and laying nests, they provide 116 square inches per bird.

Through legislation that will be enforced during 2015, California outlawed the battery cage. However, with the new cage requirement, many local producers had to install larger homes for their birds. A roomier cage means fewer birds per square inch, an expensive investment and a cascade of other rising costs. Classic demand and supply, higher production costs shift the supply curve to the left and increase price–maybe 20% according to UC Davis research. 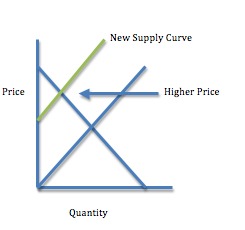 Concerned about the impact of the price rise on local producers from cheaper out-of-state eggs, California has said it will require that all eggs sold in the state adhere to the new regulation. And this is where it gets tricky.

With the intent of preserving free trade among the states, the Commerce Clause in the US Constitution says Congress shall have the power to “regulate Commerce with foreign Nations, and among the several States, and with the Indian tribes .” Out-of-state egg exporters who annually send 180 million dozen eggs to California are complaining that the new law does indeed constrain trade among the states. Or, as the Missouri attorney general who has initiated a suit against California explained, ““If California legislators are permitted to mandate the size of chicken coops on Missouri farms, they may just as easily demand that Missouri soybeans be harvested by hand or that Missouri corn be transported by solar-powered trucks.”

Returning us to Adam Smith and David Ricardo, a national market nurtures all of the benefits of the market system. Should California be able to limit the power of the market?

Sources and Resources: With the NY Times focusing on the egg law  and the Washington Post discussing the Missouri challenge, the two articles ideally complement each other while this UC Davis study presents the economic impact of the regulation. For still more on US egg production, do look at the USDA.

Is the Price of Protecting Pandas Too High?