Why We Won’t Want a Wider Highway

After a $1.6 billion investment, the expanded version of Los Angeles’s I-405 opened during 2014.  While the project was supposed to cut commute time for hundreds of thousands of drivers, a 2015 to 2019 study indicated the opposite. INRIX tells us that travel time in some stretches of the road was up a whopping 50 percent from 23 to 34 minutes.

Not all road building works out as we might expect.

With the roll-out of the new federal Infrastructure Bill, states will have $350 billion more to spend on highway projects. Sort of like Ulysses had to be tied when his ship passed the Sirens so he would not be attracted by their song, highway spending is alluring. After all, road building creates jobs, it can stimulate retail and industrial development, and it lets Departments of Transportation do what they have been created to do. And it sounds logical that extra lanes speed up traffic.

However, like I-405, extra lanes have unintended consequences. They create negative externalities that range from more congestion to more greenhouse gas emissions.

For that reason California canceled its widening plans for I-710. The artery on which freight from the port of Los Angeles travels to LA and beyond, is perpetually congested. But still, more of the roadway was not the solutiuon. Now a rail line is under consideration.

Below, you can see an example of the original I-710 proposal. I added the red X to the NY Times graphic: 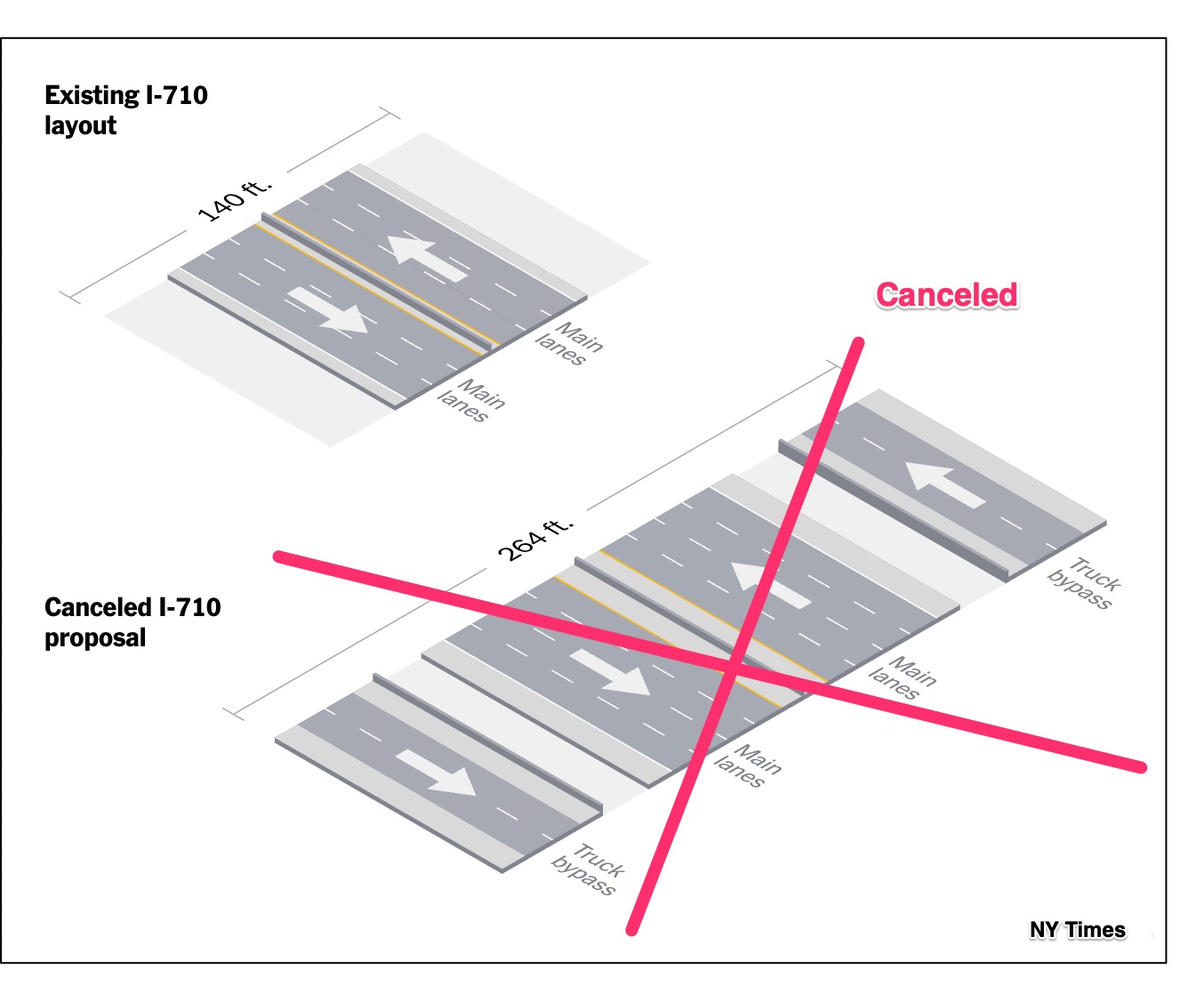 When states use federal funds for highway expansion, they could induce demand by attracting more cars. Knowing about the expanded roadway, drivers that had been taking an alternate route switch. Similarly, the commuters that were leaving later or earlier revert to their original habits. As a result, transportation experts tell us that a one percent increase in road capacity has resulted in a .9 percent increase in VMT (Vehicle Miles Traveled per person) within five years. But still, a scholar at the University of California Berkeley warns us that these conclusions are not necessarily true for all projects.

You might want to look at the current projects described in this Washington Post article  and also by the Federal Highway Administration. My own state of New Jersey will be using $292 million of federal money for a $16.1 billion project that might make it easier for me to drive to NYC. However, New York is debating the congestion pricing that would make driving into the city less attractive. I hope they coordinate their plans.

So yes, for many reasons, it will be tough to use $350 billion wisely.

My sources and more: In recent articles, here and here, the NY Times looked at the complexities of road building. Then we can look at the Streetsblog (I should note its environmental bias) for the story of the LA I-405 addition.

When the Price of Ice is a Problem

Why and How a Bee Will Get a Vaccine