Why Marijuana Prices Are Plunging

Michigan, Missouri, Massachusetts, and Colorado report a change in their marijuana markets.

Our story has to start with the federal government.

As a Schedule 1 controlled substance, nationally, marijuana markets are limited to the individual states where they are legal. People that violate its interstate transport restrictions could wind up with huge fines and long prison sentences. Still though, marijuana’s recreational and medical use is legal within 21 states and Washington, DC while 38 states and DC say it’s okay medically.

Below you can see where recreational and medical marijuana are legal: 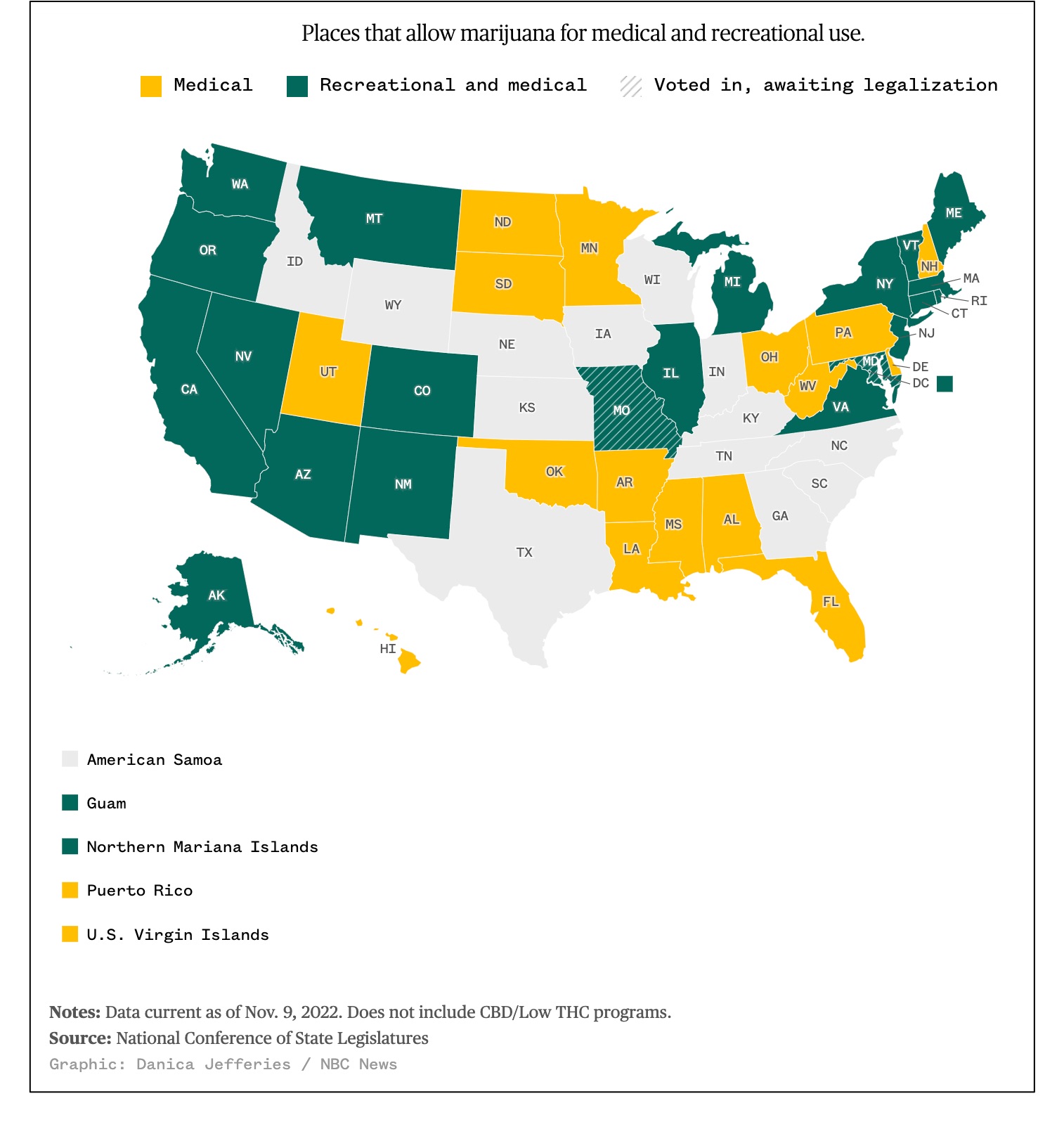 Since transporting marijuana across state lines is illegal, we wind up with a substance that can only be sold within the states that allow it. As a result, marijuana markets are statewide.

When Politico tells us that Michigan probably has three times the amount of weed that its consumers could buy, we also know that the state’s sellers cannot legally send its weed elsewhere. Consequently, prices are down by approximately 75 percent. Facing the same glut during the past year, Colorado reported that the price of a pound of marijuana is down by 51 percent, in Massachusetts the drop was 36 percent, and for Missouri, 46 percent.

Lower weed prices are classic supply and demand. We just need to to shift our supply curve to the right to see the plunge in prices;

The next ingredient that makes it even worse though is supply side inelasticity. It sounds like there was considerable growing capacity on the supply side. Michigan, for example, has six times as much weed now as in 2020.  But it has had little short term ability to repond to the price declines. With unprofitable cultivators leaving the business, we can expect less supply in the future but not for now.

Then, compounding their plight, sellers face an atypical situation on the demand side. Traditionally, when price goes down, a massive change in quantity demanded usually ups revenue if demand is elastic (which I suspect it tends to be for marijuana). With weed though, limited to each state, the quantity demanded can be somewhat inelastic. As a result, I hypothesize that the extent to which quantity demanded can rise is limited.

My sources and more: Thanks to Cary for alerting me to this Politico article. Then I used NBC’s graphics for the most recent state count. And, for still more, you might want to see the new bill for federal weed research and what the Tax Foundation says about weed revenue.

The Problem With Marijuana Markets