Why Argentina Will Get a (World Cup) GDP Boost

We know that stock market trading activity shrinks during the World Cup.

But it is also possible that the winning team’s GDP will get a boost.

In an incomparably exciting FIFA World Cup final match, Argentina won the penalty shootout. Researchers have hypothesized that the feel good impact will increase GDP because of more consumer spending and business investment. However, with more precise data than others have used, a University of Surrey economist arrived at a different conclusion.

Comparing the winners to countries that either lost or did not particiate, he estimated the impact. Only short term, he concluded that GDP rose by .25 percentage points during the next two quarters after the match. The source, he said, was exports while the reason was world awareness. In global markets, the buyers of Argentina’s soybeans, corn, and wheat will feel more disposed to buy them.

Not entirely evident (to me) still, you can see the exports impact on GDP: 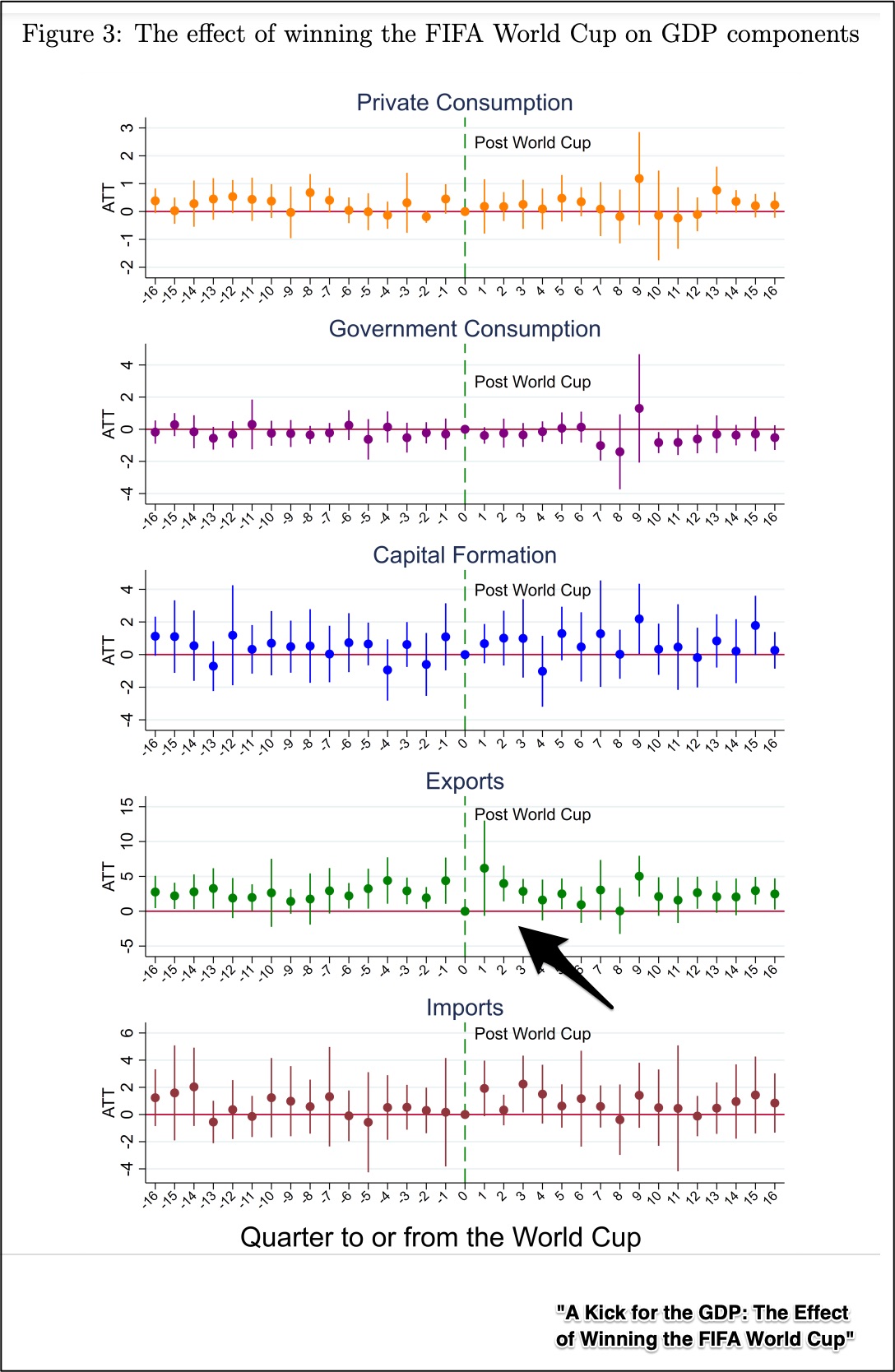 By contrast, ranging from the Olympics to the U.S. World Series, and the World Cup, the host country typically enjoys no economic benefit.

Dismal is one word that could describe Argentina’s economy. Starting with the Index of Economic Freedom, we find that Argentina’s economy, at #144 out of 177 countries, is called “Mostly Unfree.” As for the statistical perspective, their inflation rate has been a whopping 92.4 percent for the past 12 months while their benchmarket interest rate is also mind boggling at 75 percent. As a result, Reuters says they face a “repayment crunch” for their bonds.

I guess the two quarter GDP boost from the World Cup will not make very much of a difference.

My sources and more: Thanks to the BBC’s World Business Report podcast for alerting me to the World Cup research on the GDP. From there, I found the academic paper with all the details. Meanwhile you can investigate Argentina’s economy at the Index of Economic Freedom and through this Reuters article. I should note that because Argentina’s economic statistics have been questionable, I did not cite their GDP and also could would even wonder about the accuracy of what I have reported.

Why Our Tipping Behavior Changed

Our Surprising Response to Peak TV