Now that World Cup teams are at the knockouts, any game that is a draw at 120 minutes will determine the winner through a penalty shootout.

In 1982, we had the first World Cup penalty shootout when West Germany defeated France during a semi-final match. Since then, with the most successful shootout history, Germany (aka West Germany) has a perfect 4-0 record while Croatia also is undefeated at 3-0.  Close behind, but having lost to Germany in a shootout in 2006, Argentina is at 4-1. And finally, we can add eight other nations that won a shootout once.

As for the worst shootout performances, with a 1-3 record, England, Spain, and Italy top the list. In addition, 10 other countries have never won a shootout. But Mexico and Romania have the worst records with two penalty shootout defeats.

I thought you might want to see yesterday’s penalty shootout. Words don’t convey the tension and excitement:

Shootouts involve just two players, the kicker and the goalie. They start with a coin toss. Then, alternating five kicks apiece from different players (A-B-A-B order), each team’s objective is more goals than the opposition. However, if all is still even after the first five penalties for each team, then they continue to alternate kicks. Like sudden death, a team wins when it has a higher score from the same number of kicks as its opponent.

At this point, an economist might say, “Let me explain.”

Our Bottom Line: The Prisoner’s Dilemma 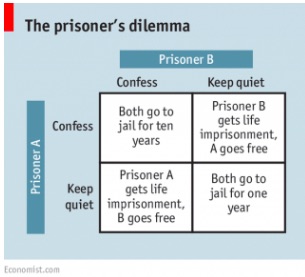 Similarly, in a penalty shootout, the goalkeeper has to decide whether to lunge to the left, the right, or remain in the middle. At the same moment, the kicker knows if he will aim for the left, the right, or the middle. With no time to react to the other’s decision, they each need to figure it out beforehand. There can be only one winner. At stake are huge amounts of money, of ego, and perhaps a championship.

The dilemma: Select the right, the left, or the middle?

My sources and more: For all I needed to know about penalty shoot-outs, The Athletic was my up-to-date source. But if you want some thorough analysis, do look at this 2002 paper from Brown and this one from economists at the University of Chicago. Finally, The Economist has a good discussion of how game theory works while this obituary introduces you to its originator, John Nash and A Beautiful Mind. Please note that parts of today’s post were previously published during the 2018 World Cup.