Where To Stash Your Cash

Explaining typical business transactions, an Argentine property developer told the NY Times that a half-inch stack of $100 bills is $10,000. He also is probably aware that a briefcase stuffed with a million dollars in hundred dollar bills weighs just 22 pounds.

Argentine business people are carrying a lot of U.S. cash because their inflation rate is soaring.

In a country that could soon have a 90 percent inflation rate, few people use local money. Any seller of a car, land, a house wants cash that will have value tomorrow. For that reason, there is huge demand for U.S. $100 bills in Argentina. Currently at 64 percent, and having topped 30 percent annually since 2018, Argentina’s inflation rate is continuing to touch new highs.

As a result, shoppers rush to supermarkets when they open to buy groceries before the daily price hikes. They barter rather than paying in pesos. No one saves Argentine currency in a bank because tomorrow it will be worth much less than today. Price tags are useless. One shopkeeper explained that the 600 peso scissors he now was selling were 120 pesos last year and 400 pesos a month ago.

According to the Federal Reserve, looking back to 2016, close to 80 percent of all $100 bills have been held outside the U.S.

The Federal Reserve’s annual money order at the BEP (Bureau of Engraving and Printing) reflects the skyrocketing demand for $100s: 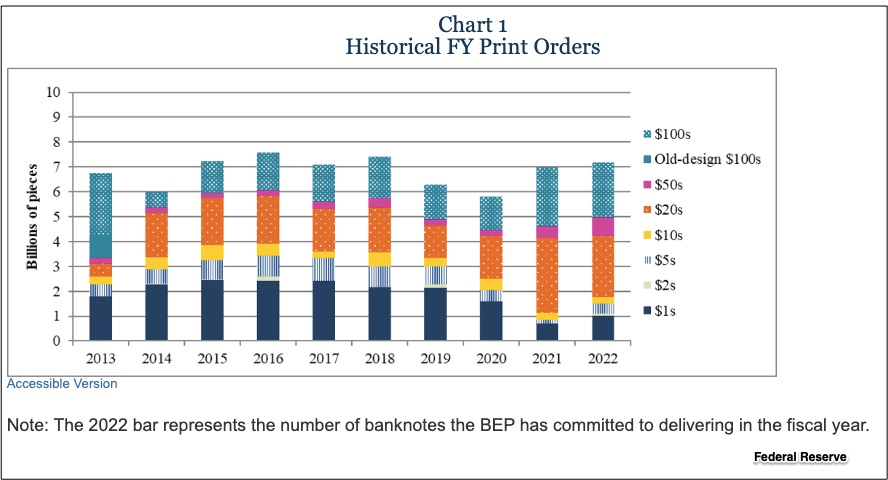 Because a $100 bill is a pretty dependable piece of paper, you can place it under your mattress today and have almost the same spending power next year. Even with U.S. inflation having exceeded 9 percent, still, the dollar is a good store of value.

Ultimately, though, there are just 3 reasons that U.S. $100 bills are so popular. They are a universal medium of exchange, a clear yardstick of value and a secure store of value–the definition of any valid currency.

My sources and more: Yesterday’s NY Times reminded me it was time to take a new look at $100 bills. It returned me to Harvard’s Ken Rogoff’s support of a “less-cash” economy. Then, this IMF blog from 2019 completed the story.

The iPhone: What We Didn't Know We Wanted