The Little Cotton Swab That Had a Big Impact

As a stick with a swab at either end, the Q-tip is our all-purpose tool. It goes up your nose and in your ear. It removes makeup, cleans dust from circuit boards, and picks up bits of evidence at crime scenes. The Museum of Modern Art (MOMA) used it to clean grime from a 1907 $1.5 billion Picasso painting.

In a magnified detail, MOMA showed us the swab that cleaned Les Demoiselles d’Avignon:

My favorite, though, is the bow and arrow. A non-lethal weapon, it’s perfect for all of us.

These are the instructions:

Where are we going? To a small innovation that had a big impact.

The first swab appears to have been a piece of cotton wrapped around a toothpick. Used by a mom to clean her child, this clever tool resulted in her husband’s Eureka moment. 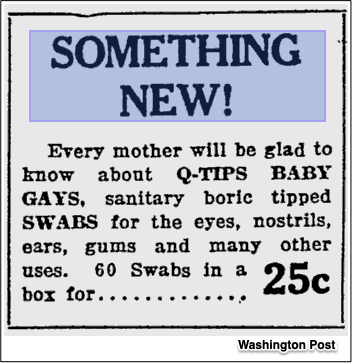 Leo Gerstenzang, a Polish immigrant, was the man who recognized the potential of the cotton swab. Soon manufactured at Puritan Medican Products, the swab was a perfect complement for their mint toothpicks. Forty years or so after their introduction, Chesebrough-Ponds acquired the firm and then, in 1987, Q-tips’ current owner, Unilever,  bought Chesebrough-Ponds.

Fast forwarding to now, during the pandemic, we needed an unfathomable number of swabs. Responding, Puritan expanded production from 5 million to 100 million a month. Now, having added a new Tennessee plant, they expect to be able to provide us with as many as 300 million a month–enough for every person in the U.S. to get a swab.

Hearing output balloon, an economist would refer to supply elasticity. Like a rubber band, supply was able to stretch in response to our testing needs. In a short period of time,  land, labor, and capital upped their capability.

However, market-inspired innovation is the real reason we have so many swabs.

Long ago, Edwin Mansfield (1930-1997), a University of Pennsylvania economist, said that a seemingly small innovation can have a large impact through its private and social return. While he was referring to manufacturing inputs like thread, he could easily have been talking about a swab. Its private return, as profit, initially went to Mr. Gerstenzang and his firm. But then, a second phenomenon kicks in. Rippling across millions of individuals, a social return creates the positive externalities that bring benefits to countless individuals.

That social return began with a mom and her baby using one toothpick with a piece of cotton and wound up as a supply of 300 million a month.

This Q-tip ad is rather delightful. Do take a look:

My sources and more: If you would like to know more about the swab, this Washington Post article has the facts. Even more precise, MOMA refers to the swab here. We should note also that Q-tips are not the only cotton swabs and a part of today’s Bottom Line was in a previous econlife post.