Months ago, we looked at the impact of your car’s back seat. Researchers have hypothesized that your back seat could have made your family smaller. Because of many states’ regulatory policies that mandate car seats for increasingly older children, two parent families need to place all the kids in the back. However, a typical car’s back seat accommodates two children. (Perhaps) because you need a pricier SUV or a minivan for three kids, there were 8,000 fewer births during 2017.

Butter was also shaped by technology.

Long and skinny, East Coast butter sticks are called Elgins. The fatter ones from the West Coast are “Western Stubbies.” Predictably, we need different butter dishes. 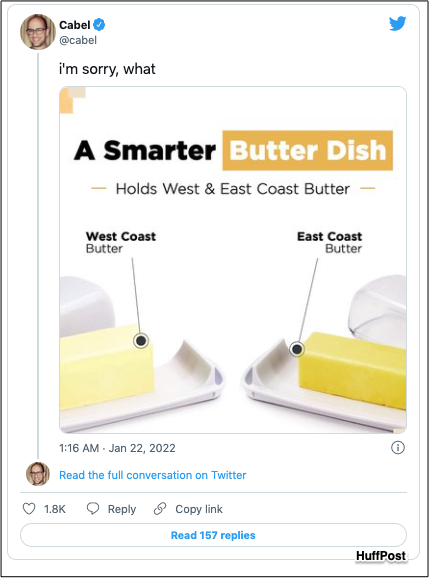 If we travel along the road of butter making history, our first stop is Elgin, Illinois, the Butter Capitol of the World. In 1907, butter technology changed when Swift & Company asked the Elgin Butter Company to produce quarter pound sticks as well as the more typical 1-pound blocks (and larger). Reputedly, it all began with a letter from a New Orleans chef. Rather than the larger blocks he had been buying, quarter pound sticks made table prep easier. The butter makers also realized that charging 10 cents for a smaller quantity expanded their market to the consumers that could not afford more.

The following is an excerpt from paper about butter packaging history The author described how the manufacturer switched to butter quarter pounders:

After 1907, with new churning techniques and refrigeration, butter tech progressed. However, it took until the 1960s for California to become a dairy state that could start to produce its own butter. Developing state-of-the-art equipment, California’s butter makers leapfrogged the older Elgin machinery and wound up with the “Western Stubby.”

Whether looking at back seat car design, butter manufacturing, or countless other goods and services, sometimes the tail wags the dog. Factory equipment and software design create the incentives that shape our everyday lives.

I wonder if the fatter shape leads to bigger butter portions on rolls.

My sources and more: Thanks to NPR for alerting me to the difference between East and West Coast butter. From there, Huff Post and Marketplace had the details. Then for even more facts, this 47 page 1948 paper on butter packaging has it all.

How Our Income and Spending Can Create Happiness

When a Judge Has a Tasty Case