Why Your College Major Matters

College can give us some clues about the gender pay gap.

In a recent paper, researchers connected college majors, occupations, and the gender pay gap. To determine high and low paying jobs, they identified a “potential wage” that was equal to the median amount a white male would earn. In that way, they determined whether women entered more lucrative occupations.

First they looked at 134 college majors. They found, for example, considerable gender sorting in Engineering and especially with  Aerospace Engineering. As the engineering career with the highest wages, the major was 88 percent male. Meanwhile, at the low end, Early Childhood Education was 97 percent female.

Below, in Panel A, you can see where women increasingly entered male-dominated college majors. It was most pronounced for Biology/Life Sciences but much less so for Business: 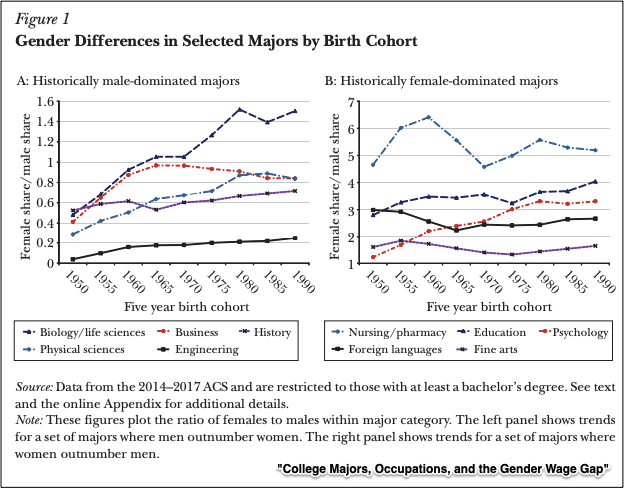 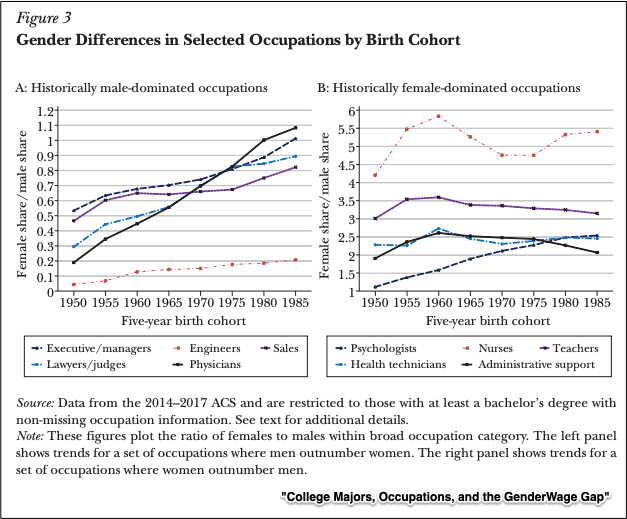 The last step was connecting it all to wages. Similar to our first graph but now for wages, the lines head somewhat upward, displaying a hint of a convergence between male and female wage differences. However, there is one final difference at the occupation stage. Even when men and women have the same college major and occupation, more of the men become the managers with higher wages: 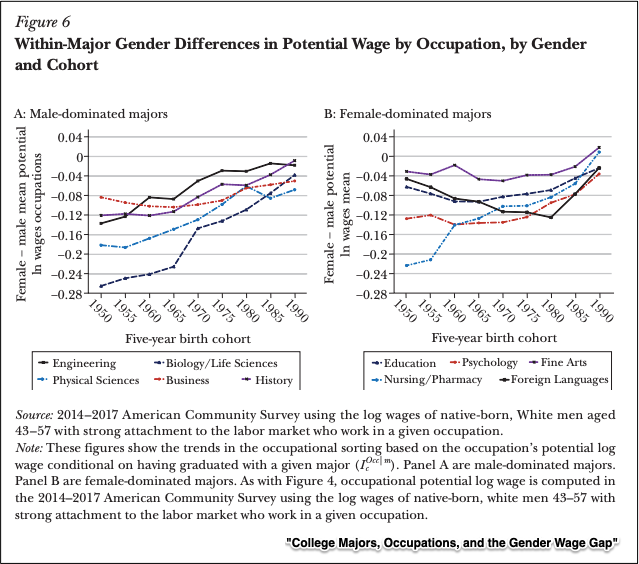 Researchers concluded with a somewhat encouraging trend. Women born during the 1950s selected majors that took them to careers with “potential wages” 12 percent less than men. The difference decreases to 9 percent for the 1990s cohort. More happily, researchers cited the difference between the 1950 and 1990 birth cohort for Engineering. Whereas, the 1950 Engineering group of women had a 14 percent lower potential wage, for the 1990 group, it was equal. In 1950, Engineering majors numbered 20 men for every one female. In 1990, the ratio was 5 to 1.

They also concluded with a surprising reference to David Ricardo’s comparative advantage. They suggested that women could have a comparative advantage in the home. Consequently, even if they are as productive as the men at work, still, they will be the caregivers. They will self-select the lower wage occupations that let them sacrifice the least at home.

If women have a comparative advantage in the home but are equally productive at work, then women might continue making decisions that perpetuate a pay gap.

My sources and more: All of today’s discussion is based on this paper from the The Journal of Economic Perspectives. But, if you want a summary, Timothy Taylor presents the main facts in his Conversable Economist blog.