Right now, the U.S. corporate tax rate is close to the world average: 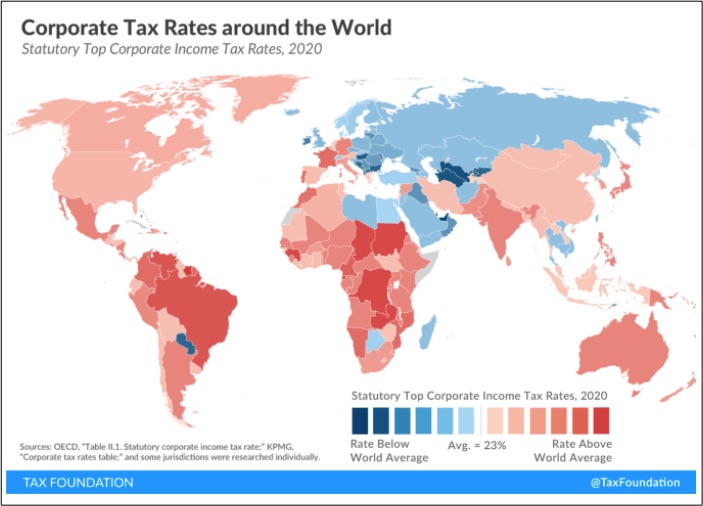 But, if other OECD (Organization for Economic Cooperation and Development) countries agree with Janet Yellen, we could wind up with a global minimum corporate tax for multinationals.

The 2017 tax act brought the U.S. maximum corporate tax rate down to 21 percent from 35 percent. In 1980, it was close to 40 percent. Higher rates concerned policymakers because they encouraged companies to locate their headquarters in countries with lower taxes. We wound up losing jobs from the foreign direct investment the rates discouraged and sacrificing revenue from domestic firms that left looking for a better deal.

As a result, corporate tax rates have been sinking. From 2000 to 2018, 76 countries cut rates while six boosted them. Hungary even went down to a low of 9 percent.

Now, trying to reverse the trend, Secretary Yellen supports a non-binding global minimum corporate tax rate. The opposition says that non-OECD nations could benefit if they lowered their rates. Tech firms worry that the new arrangement could increase their tax burden if it included digital collections from their customers everywhere. And others say wealthy countries will benefit if the taxes are based on the location of profits.

But Secretary Yellen needs to stop the slide so that the Biden administration can pay for its spending plans.

Our Bottom Line: The Real Rate

Sort of like a Magritte painting, the tax rate you see is not really what exists.

The OECD used 25.8 percent instead of 21 percent as the U.S. corporate tax rate because they included an average state statutory 6 percent rate that firms also pay. Really though, the  number to remember is 11.3 percent because it was the effective rate paid by many large corporations. In fact, 91 large businesses paid no taxes. It all depends on the loopholes, the credits, and the deductions.

So, it is tricky to debate a universal minimum tax rate that won’t actually exist.

My sources and more: The Washington Post was a good starting point for corporate minimum tax facts as was the World Bank. From there, Reuters had the bigger landscape, and the Tax Policy Institute and the Tax Foundation told more about U.S. taxes. Then finally, completing the picture, these papers, here and here, had the analysis.

How One Stuck Ship Can Upset a Whole Supply Chain