Why College Tuitions Are Up and Other Prices Are Down

It’s tough to find a real “list price” for a college tuition.

According to NY Times money columnist Ron Lieber, the price charged by one school can vary considerably. Sort of like we all pay a different fare for the same plane going to the same place, college tuitions for the same four years on the same campus also are different.

Still though, the trend is similar at 389 “national universities’–the schools that that offer a range of majors,  have graduate programs, and do research. U.S. New & World Report tells us that we are looking at average tuition and fee increases of 144% that range from 165% at out-of-state schools to 212% at public universities.

You can see that tuition has steadily climbed: 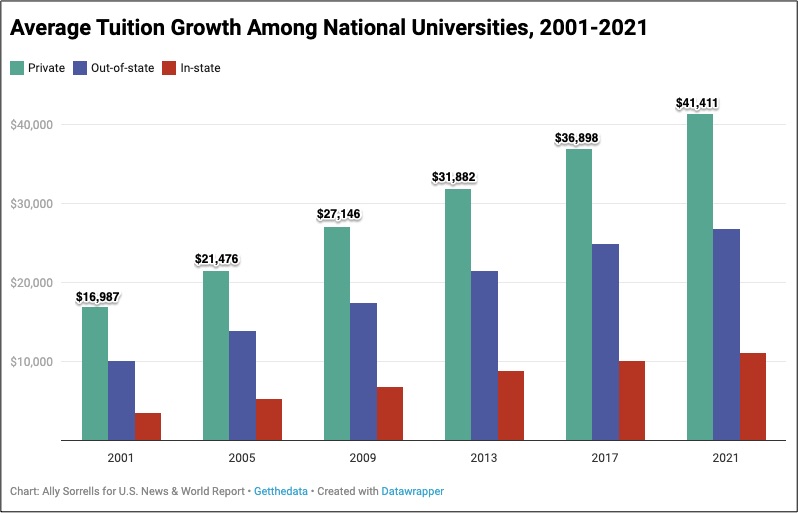 Colleges are not alone. Since 2000, other goods and services have also become pricier…but not all.

While average prices have gone up 54.6% during the past twenty-one years, certain categories of goods and services are cheaper. Dropping the most, TV prices were down by 97%. Somewhat similarly, toy prices have plunged by 73% and cell phone service dropped 40%.

But college expenses and hospital services have soared:

Asking why certain goods and services had substantial price hikes and not others, we get many answers. A big one relates to trade.

Through trade, we can differentiate the more expensive from the more affordable goods and services in the “Price Changes” graph. Starting with a definition, let’s just say that a tradable good or service is sold away from its home country. Correspondingly, our nontradables remain where they were made.

Looking at my pink arrows, we can think about the price increases for nontradables and services like a college education:

Yes, we know that far beyond trade, there are many causes for skyrocketing tuitions. Mr. Lieber tells us that they relate to foreign students being willing to pay full price, to the student (and parent) loans that are available, to snobbery, and to programs like Purdue’s that ask students to share future income. It can even take us to the amounts of “merit aid” schools do and don’t offer.

Still though, the BLS paper emphasizes the competition that trade brings to a market. As they explain it, “In any given country, the cost for traded goods should not exceed the cheapest price globally. By contrast, nontraded goods compete only domestically and can therefore have different prices from country to country. If all this is true, then goods that are traded should have lower inflation than goods that are not.”

Consequently, we wind up with lower prices for items like TVs but not education.

My sources and more: Pairing this NY Times article with economist Mark Perry’s “chart of the century,” created an interesting synergy as did this podcast. Then, for tradables and nontradables, I returned to this BLS paper and all of the pieces came together.

Please note that the authors of the BLS paper expressed concern that their time frame was just six years. They suggested further research in a number of areas. Also, several sentences in this post were in a past econlife.

When Does Money Make Us Feel Good?

How Legos Helped to Build a Vaccination Center