Based on the trade deal that kicked in last February, China has an obligation for 2020 and 2021. According to the agreement, they have a shopping list that includes soybeans, oil and gas, airplanes, and financial services. By the end of this year, in just two days, they should have exceeded 2017 purchases of U.S. goods by at least $63.9 billion. The total 2020 goods target is $159.0 billion. Combined, their 2020 and 2021 obligation is an extra $200 billion.

Our most up-to-date numbers extend through November. If there had been a monthly schedule, then, last month, China was 58 percent behind what they should have imported from the US: 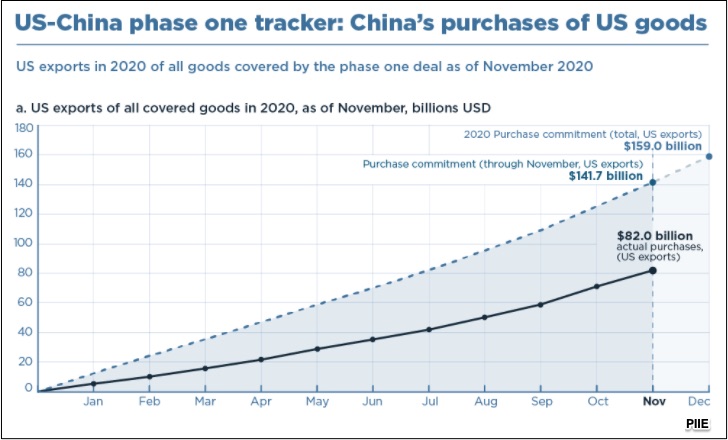 The question is whether they can make up the gap by January 1, 2021.

Please think four buckets. The 96 page phase one trade agreement included 1) agriculture, 2) manufactured goods, and 3) energy. The last bucket is financial services for which we don’t have the current data.

With actual at $22.5 billion and the prorated total at $29.6 billion, China’s import shortfall is $7.1 billion in farm goods. That takes us to 76 percent of what it should be: 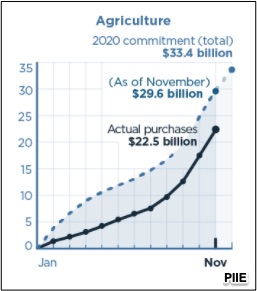 At $37.5 billion, the difference between actual and the deal’s commitments for manufacturing exports to China is larger than for agriculture and energy. As a proportion of what it should be, we are at 58 percent: 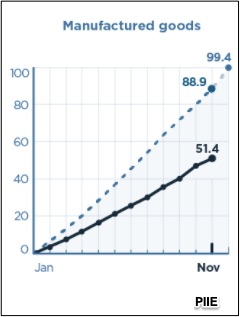 Again comparing actual and prorated, we have a gap of $14.9 billion energy-related items not yet bought by China. In other words, we are looking at a 35 percent gap: 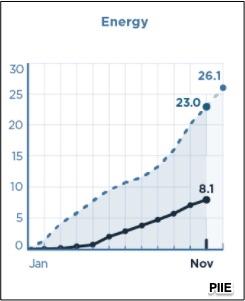 Our Bottom Line: The Phase One Trade Agreement

Signed on January 15, 2020, the Phase One Economic and Trade Agreement went into effect on February 14, 2020. Essentially, it specified an extra $200 billion (above 2017 levels) that China would import from the U.S. The agricultural imports ranged from soybeans to cotton and seafood. For manufacturing, machinery and chemicals were a part of the deal. With energy, it was liquefied natural gas and crude oil. And, the services sections included finance, insurance, the cloud, and travel.

We could say that phase one was about the “low hanging fruit.” It covered where China would diminish non-tariff barriers like regulatory restrictions and cancelled certain U.S. tariffs. At the same time, the tough stuff was postponed for phases 2 and 3 when they were supposed to make the intellectual property transfer and patent protection decisions.

Where are we? China appears to have partially adhered to its side of the deal and we can ask if there will ever be a phase 2 and 3.

My sources and more: Periodically, I take a peek at the Peterson Institute’s US-China  trade updates and also what the NY Fed’s Liberty Street blog says. Both are excellent for trade updates. Then, the best summary of the phase one deal was from EY.

Where Gasoline Is Most and Least Affordable