Where Gasoline Is Most and Least Affordable

What you pay for gasoline depends on where you live.

With Venezuela the cheapest and Hong Kong the most expensive, the price of gasoline ranges from $0.08 cents a gallon to $8.71. The irony though is that gasoline is virtually unavailable in Venezuela because its refinery capacity has collapsed under socialist rule. According to Reuters, the government still is subsidizing a whole tank at $1. 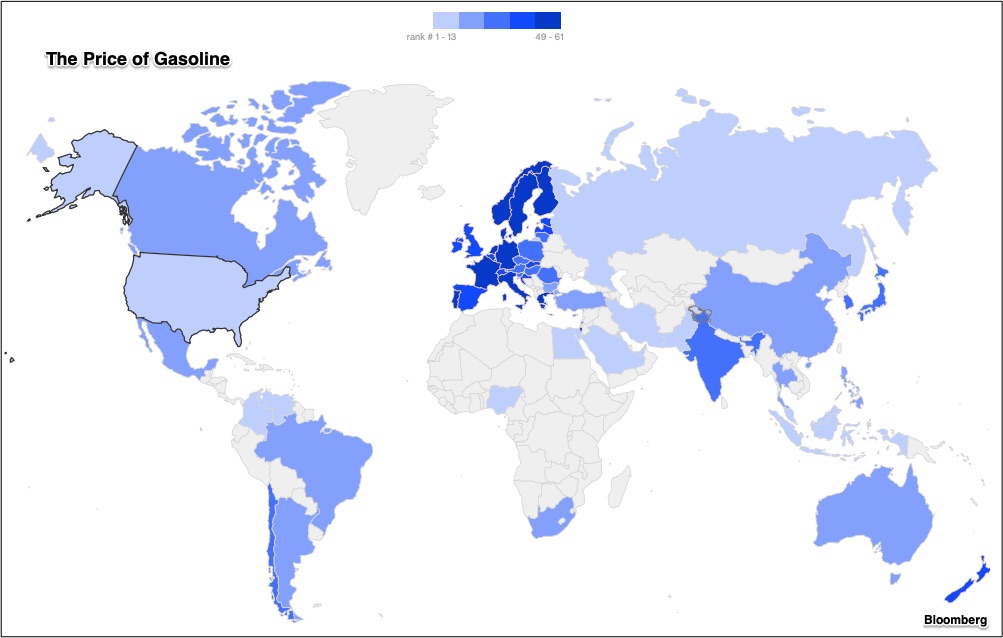 The message changes a bit when you consider affordability: 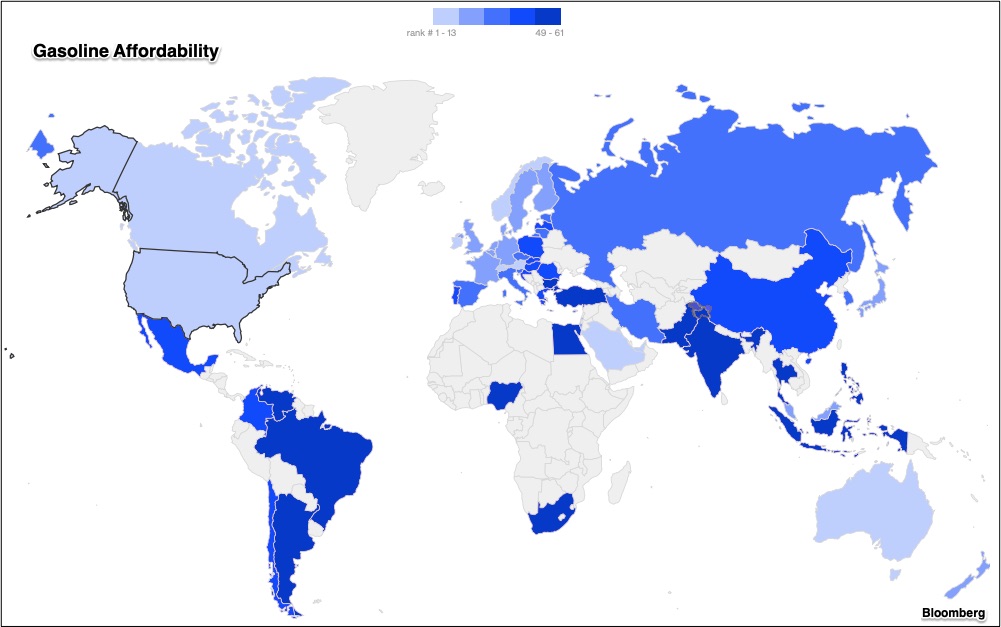 Through a horizontal scale that lets us compare, Bloomberg then provided the specifics for 61 countries. I’ve copied some of what they presented for the U.S., Canada, the U.K., Australia, the Philippines, and Venezuela.

Because U.S. gasoline is relatively cheap, the average driver uses close to 427 gallons a year, just 1.64% of a typical salary.:

Canadians are second (per person) to the U.S. with their massive mileage. In a year, the average driver uses 327 gallons, 2.46% of a typical salary:

In the U.K., with high gasoline prices, the average driver uses close to 67 gallons a year, ,85% of a typical salary. By 2040, they plan to prohibit sales of gasoline and diesel powered new cars:

Among 61 countries, at #59, gasoline in the Philippines is relatively unaffordable. Just 13.42 gallons a year cost 1.38% of a typical salary:

Even with the world’s cheapest gasoline, it is relatively unaffordable. At 102 gallons a year, the average driver spends 5.25% of a typical salary:

Next, I wanted to share some actual gasoline prices. From a long list of most of the countries in the world, below, I’ve included the 10 cheapest prices and the 10 most pricey. The U.S., at #32 ($2.59) is one of the few developed countries where we can fill our tank relatively cheaply. The average world price is $3.93. One reason it varies so much is the taxes that elevate prices and the subsidies that lower them: 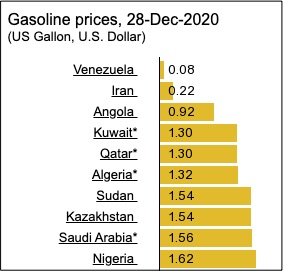 An economist might have responded to high and low gasoline prices with one word, elasticity. The impact of a tax that increases the price of gasoline or a subsidy that lowers it depends on your price elasticity of demand.

Elasticity is the demand concept that recognizes how each of us responds to a change in price. If that response is minimal, as with medication, then our price elasticity of demand is inelastic. We want those pills or that gallon of gasoline, no matter how much we have to spend. Other drivers though are price sensitive. More elastic, their willingness and ability to buy a pricier gallon plunges when cost is up.

In one country and among many, our elasticity varies.

My sources and more: I was able to find a slew of sites with gasoline prices. Bloomberg was perfect for the maps and the Global Petrol Prices website, for up-to-date data. I had some fun with Deutsche Bank’s 2019, “Mapping the World’s Prices” because it had so many other prices. Then Reuters had more on the Venezuela story.

Please note that some sections of “Our Bottom Line” were in a past econlife post. Also, precise gas prices varied fo the same country because the dates for the data were slightly different.

How Covid Changed The Cost of Living