The Vials That We Need For Vaccines

When details become ever more complex, they remind me of a mathematician’s description of the British coastline. From afar, it looks like a continuous curvy line. Up close though, the zigs and zags multiply until its length becomes infinite.

The same can be said about the vials we need for vaccine distribution.

Let’s start by imagining boxes of Pfizer’s mRNA COVID-19 vaccine in boxes containing 1,000 to 5,000 doses. Next, please also picture the U.S. $1.95 billion order for 100 million doses in vials that have to withstand temperatures as low as minus 100 Fahrenheit. They need to weather packing and unpacking, freezing and defrosting, machines and human hands. Any flaking, any microscopic cracks, and the vaccine is ruined.

When you think of the vaccine in transit, please picture a vial, perhaps similar to our featured image from Corning.

The Corning vial, called Valor, is super strong. (Pfizer has a contract with Corning.) Corning’s vial-making process includes an eight-hour dunking in a bubbling 572 degree Fahrenheit salt bath, a step that adds time but also strength. Another strength boost comes from using aluminum instead of the more traditional boron.

Making the Valor vial involves the innovations that add to its durability: 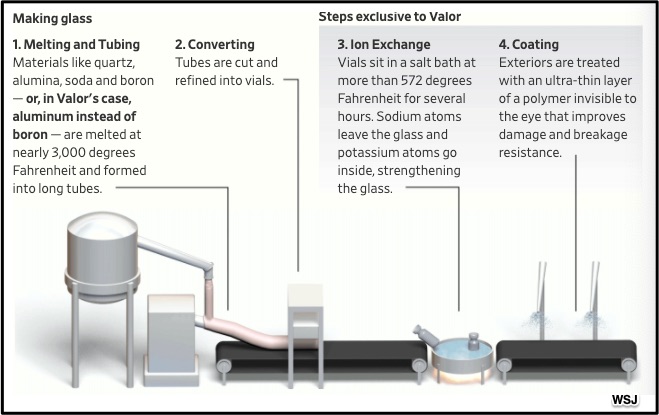 Below is a different version of the vaccine vial, made by SiO2 Materials Science:

Now, with orders accelerating, vial manufacturers need to make many millions a month. To boost its manufacturing capability, Corning moved up the opening date for a new factory, perhaps because of a $204 million U.S. government contract.

Sometimes a private profit can turn into a massive benefit for society. During the 19th century, some canals were privately financed. Then, as a part of a network that facilitated trade across the nation, the benefit from one canal could ripple across the country to help millions of people get products that otherwise would not be available. A University of Pennsylvania economist used a new kind of manufacturing thread as an example that achieved a similar objective. While the developer made a relatively small profit, the social benefit was massive.

Like canals and thread, super strong glass vials will add to the Corning and SiO2 Materials Science bottom line. Subsequently though, as vaccination rates rise and we control COVID-19, the benefit to all of us will be huge.

Oversimplifying to convey the basic idea, on our graph we show two demand curves. The first lighter blue curve crosses supply at a lower quantity because it does not account for society’s benefit. If it did, then demand would increase as would price. To get that supply increased, we need the incentive. For vaccine vials, it came from the $204 million order. (Do note that PMB stands for private marginal benefit and SMB, social marginal benefit.)

So, all we really have is a graph that shows the additional benefit of an innovation beyond its developer: 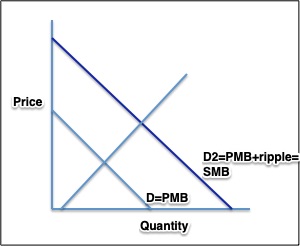 All of this returns us to the mind boggling complexities that compose vaccine production and delivery. It also reminds us of the private and public benefits that propel vial development.

My sources and more: Through a gated WSJ article, I first learned about the intricacies of making a strong glass vial. It was preceded by this more general story about vial production.

Our featured image of glass vials is from Corning via WSJ.

Our Weekly Economic News Roundup: From Marijuana to the Minimum Wage