The Gasoline Taxes That Are Hit by Covid-19

On October 1, I will be paying more at the pump.

Because of the pandemic, we are driving much less, buying less gasoline, and sending less gas tax revenue to New Jersey’s Transportation Trust Fund. On the NJ Turnpike, traffic volume was down 63 percent during April.

Since a 2016 law mandates the amount the Transportation Fund needs to collect each year, a shortfall means a tax increase. The hike will be 9.3 cents. Added to the existing 30.9 cent state gasoline tax and the motor fuels tax, the total now is up to 50.7 cents a gallon.

New Jersey’s gasoline tax is one of the highest in the United States. Compared to Europe, though, it does not look quite so bad. 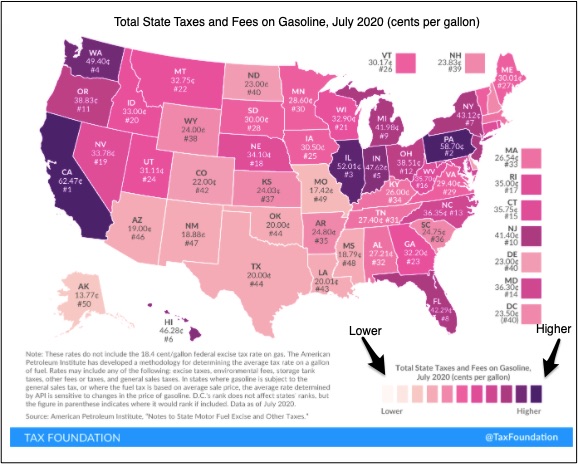 While the European Union requires a minimum gasoline tax of €0.36 per liter (US$1.53 per gallon), 26 of the 27 EU countries charge more. At a whopping €0.80 per liter (US$3.39 per gallon), the Netherlands has the highest tax. Bulgaria, meanwhile, kept the EU minimum.

Although they exited the EU, the U.K. is shown on the map. Also, we should note that many Europeans drive a diesel-powered vehicle. The diesel tax is 10 euros less than the €0.55 per liter average gasoline tax.

Below you can see that Italy, Finland, and Greece have the highest gasoline taxes:

We can say that New Jersey has a good gasoline tax (an oxymoron?) because it benefits the people who pay it. According to state law, the tax revenue goes to a Transportation Trust Fund. Stated on the Fund’s website, it is then spent on the “planning, acquisition, engineering, construction, reconstruction, repair, and rehabilitation of the state’s transportation system.”

The downside of the gasoline tax is its regressive impact. As economists, we place one of three labels on a tax. It is progressive if it takes a higher proportion of the income of those who are more affluent than those who have less. Since tax rates are higher for those who make more, the U.S. income tax is progressive. Other taxes are proportional where, like the flat tax, everyone pays same percent on their income. The third kind of tax is regressive because those who have less pay a higher proportion of their earnings.

Please think of it this way. Every time each of us pays the same 50 cent state gas tax, it is different for everyone. For households that earn the federal minimum wage of $7.25 an hour, that 50 cents is a 6.9 percent slice of that money. However, if we make $15.00 an hour, then, at 3.3. percent, it is a much smaller piece of our income. Because a sales tax is regressive, some people say it is not a fair tax.

Returning to where we began, we can ask how to judge New Jersey’s soaring gasoline tax. Should our lens see the benefits it funds or its regressive side?

My sources and more: Thanks to my neighbor Joan for alerting me to the NJ gas tax hike. One good place to look for the facts was northjersey.com and also Bloomberg. From there, the Tax Foundation let me compare New Jersey to other states. And then, taking the next step, the Tax Foundation looked at Europe.