This year the race was postponed from a late June start to now because of the pandemic. It began on August 29 with a day each for 21 stages (and 2 rest days). The fastest rider for the whole race wins although each stage is timed separately.

Whoever is leading during each stage gets to wear the yellow jersey. One financial services company paid $12 million to have its name on that jersey: 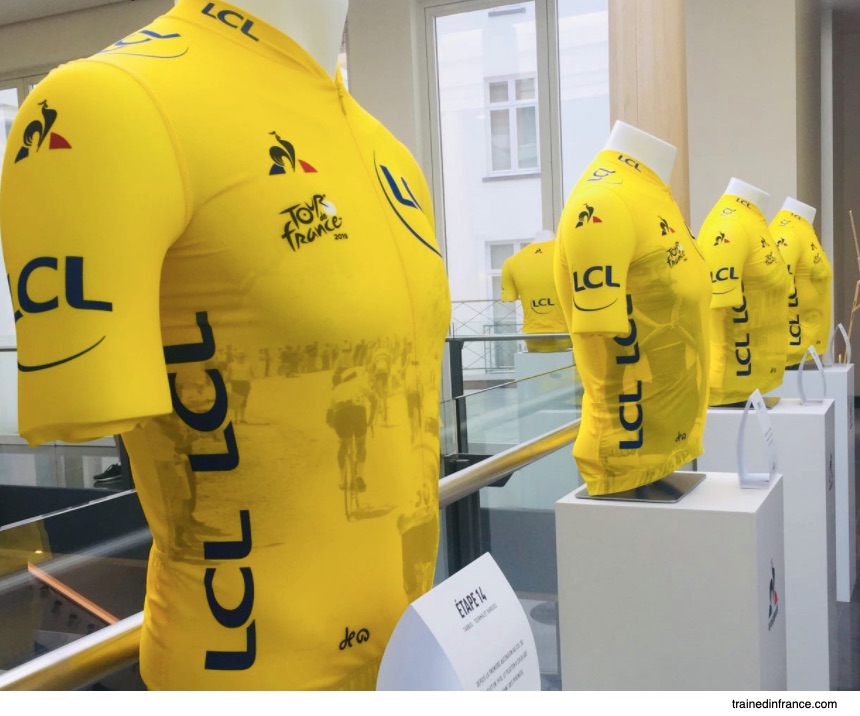 As a free race, the Tour de France can be pretty costly.

Today is Stage 10 of the Tour de France. Riders started in Nice and will end in Paris through a route that reputedly has some tough climbs  and a “dearth of flats.” It extends for 2,165 miles, through 8 mountain passes. Top speeds are close to 63 MPH.

This is the route: 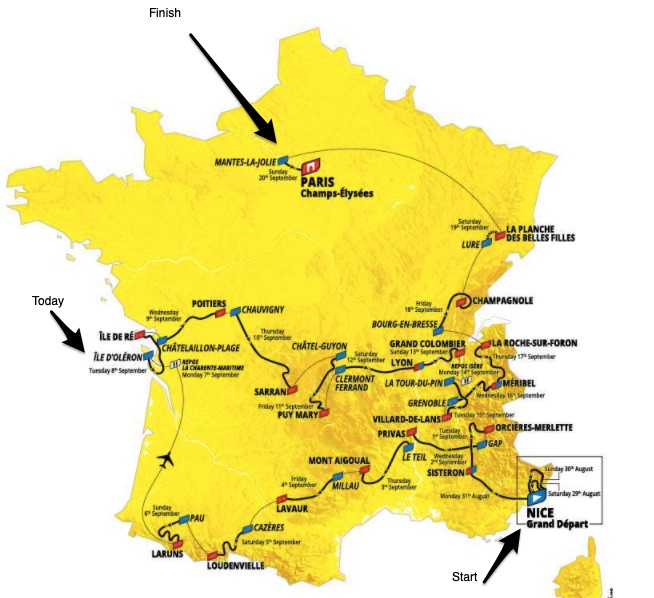 For the past 55 years, the Tour de France has been “owned” by the Amaury Sport Organisation. While no tickets are sold, still, Amaury generates somewhere between  $60 million and $150 million. Although no one is sure how much, we do know where the money comes from.

These were the sources of revenue for the 2019 Tour de France: 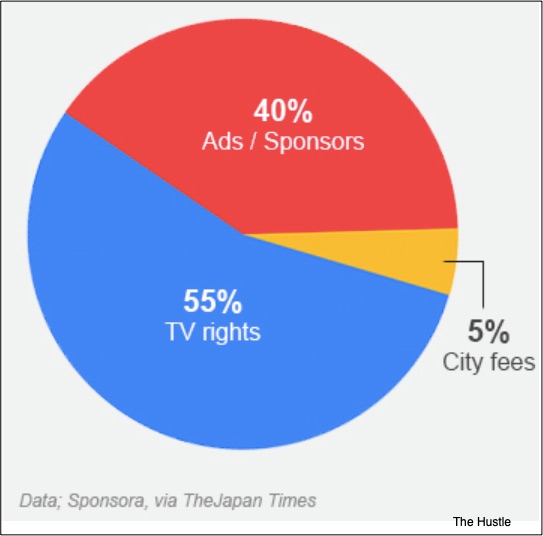 It can be expensive to be a part of the route but municipalities are willing to pay. To host 3 stages of another race, Denmark spent $3.9 million. However, we are just talking about 5 percent of the total.

Sponsorships generate much more.  The possibilities include a 250 vehicle publicity caravan that costs participants somewhere between $200,000 and $600,000. You can also get your name on a jersey for several million dollars. In addition to the yellow jersey for the leader, the best sprinter is in green, polka dots are for best climber, and the best young rider is in white: 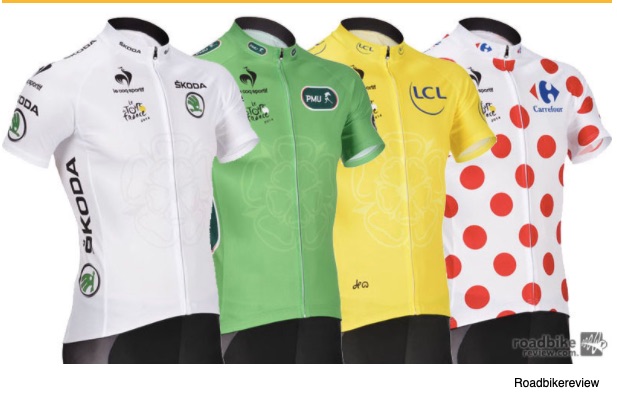 As for the TV rights, France Télévisions might have paid $25 million for one year. To stream the race, they would have needed 260 camera people, 35 vehicles, and 6 airplanes.

So yes, the organizer makes big money but that’s only part of it. This year there are 22 different teams. Financed by sponsors, a team can spend as much as $20 million. They too say little about their money but this is what we know: 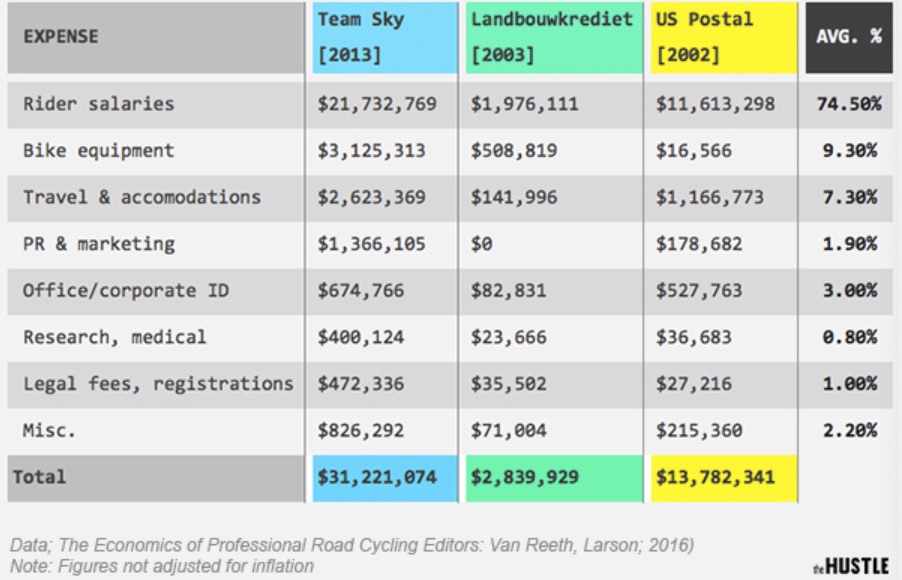 Until the 1950s, biking companies were the main team sponsors. Then, between 1992 and 2014, budgets soared. Now team money comes from groups that range from the Belgian lottery to a supermarket chain.

Team Sky’s sponsor is the company controlled by a British billionaire: 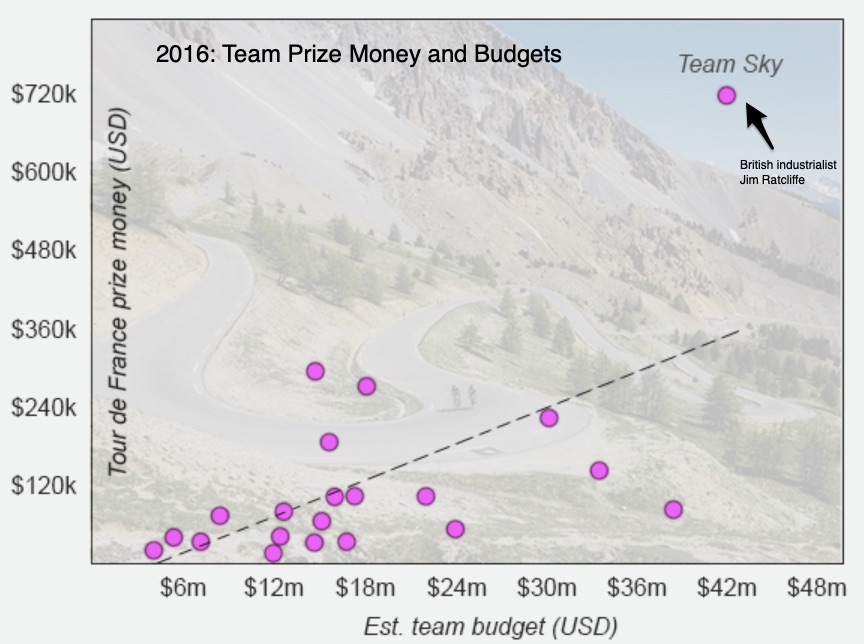 Defined as the “line” where something extra occurs, the margin requires decisions and tradeoffs. (After all, there is no free lunch.) Whether it is how late to sleep, how fast to drive, or how much to eat, you and I always make decisions at the margin. So too do businesses and governments, and especially the teams that compete in the Tour de France.

My sources and more: Thanks to my Hustle email subscription for alerting me to the economics of the Tour de France. Then, for more, you might enjoy the details of the caravan, of the prize money, and the Tour web site for the basics. Our featured image is from USA Today.

A Labor Day Look at Our Time Squeeze

The Gasoline Taxes That Are Hit by Covid-19