Like me, perhaps you are again having difficulty buying paper towels. As of August 9th, close to one-fifth of all paper products were sold out: 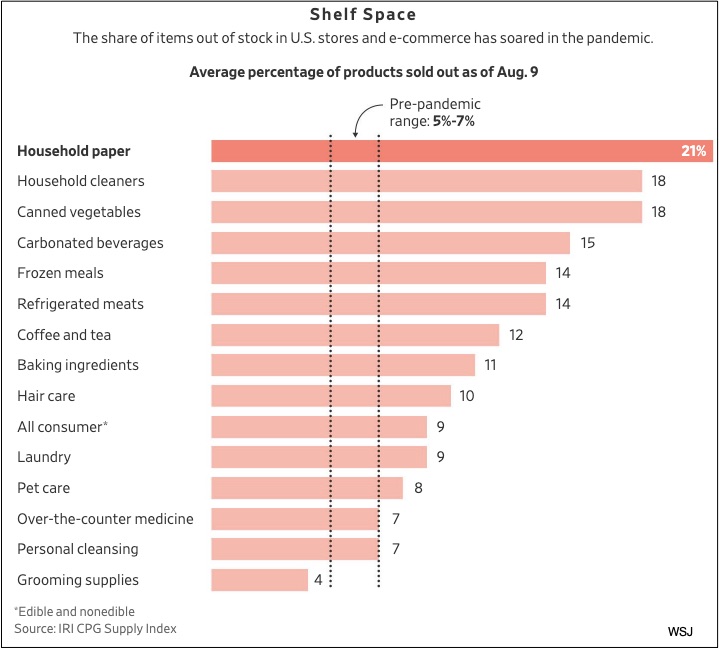 One reason could relate to a Toyota.

Toyota engineer, Taiichi Ohno, says that a visit to a U.S. supermarket during the 1950s inspired him. At the time he saw that shelves were restocked at the ideal moment. Avoiding too much or too little merchandise, they were replenished as people shopped.

When Toyota applied the same concept to auto manufacturing, it wound up with “just-in-time” procedures. From their raw materials to the final products, the goal was to minimize expensive inventory. Also called lean manufacturing, the approach boosted efficiencies.

Walmart achieved similar cost control through delivery constraints. They told suppliers how much they needed and when, within a two-day window, it could arrive. By controlling inventory, they were able to pay for goods that were soon sold.

Lean production and distribution soon spread to paper towel factories where inventories and equipment functioned optimally in a pre-Covid-19 world. However, a pandemic spike in demand exposed its downside. When quarantines kicked in, so too did paper towel shortages: 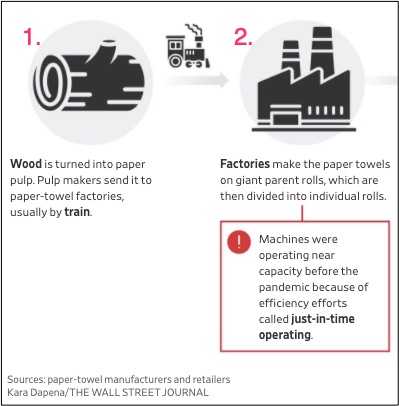 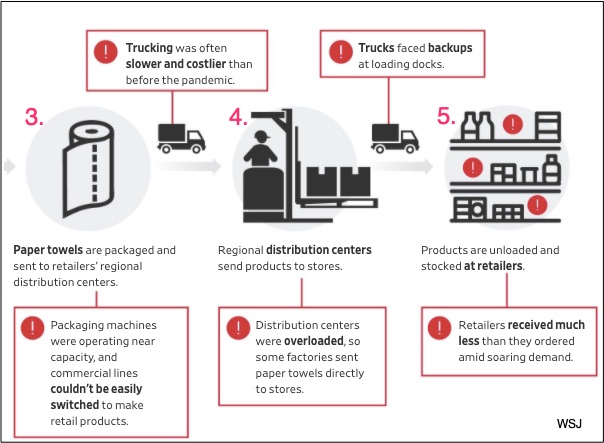 Below, you can see the spike: 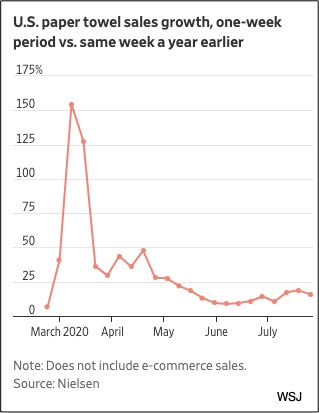 Economists like to say that we are always thinking at the margin. The margin is where we move from what we have to something extra.  A profit margin involves how much extra a business earns. A margin of error describes how much (extra) room we have for a mistake.

Similarly, lean manufacturing changes the margin. Implemented by paper towel manufacturers, lean efficiencies eliminated extra inventory.  Or, as P&G’s CEO said, “You wouldn’t run a business at 30% or 40% extra capacity. The cost of that would not allow you to price in a way that meets customer needs.”

But now, I have difficulty finding my Bounty towels.

My sources and more: With facts that ranged from paper towel manufacturing to lean production history, this WSJ article was excellent. Then, for more on firms that use lean techniques, this NY Times article has the examples.

Our featured image is from Georgia-Pacific via WSJ.

Our Weekly Economic News Roundup: From Pepperoni Pizza to the China Trade Deal