Several years after the 1978 Airline Deregulation Act, one Delta executive became horrified that his reservations staff had lowered fares for the Atlanta/Washington D.C. route as the departure date approached.

I suspect I would have lowered those fares also. If you have empty seats, it makes sense to attract more fliers by lowering the price. The right approach though was precisely the opposite. The airline should have been increasing fares because last minute fliers are willing to pay much more.

And now again, airlines are not quite sure about how to price a fare.

Because of deregulation, airline decision makers had a new world of fare making to navigate. Whereas previously, government’s Civil Aeronautics Board let airlines preserve a healthy bottom line, now competition and markets would set prices. Quickly moving to a dynamic pricing model that selected a different price for each flier, the airlines had to determine whether the flier was discretionary or business, if the flight was departing in days or months, and how many seats remained.

We could say it’s all about revenue management. Computer algorithms tell airlines the highest possible prices, when to charge them, and for which seats. Among a dozen other prices, the lowest could match a discount flier with the same route. Meanwhile, the highest could be a refundable “walk up” several days before the flight. The common thread is the big data from the past that tells them what to charge for the future.

No more. The pandemic obliterated the ability to determine the right price for a future flight.

They do know though that confidence needs to be restored. Below, business confidence is way up, but still IATA ( the International Air Transport Association) remains concerned about a “gradual and patchy” recovery: 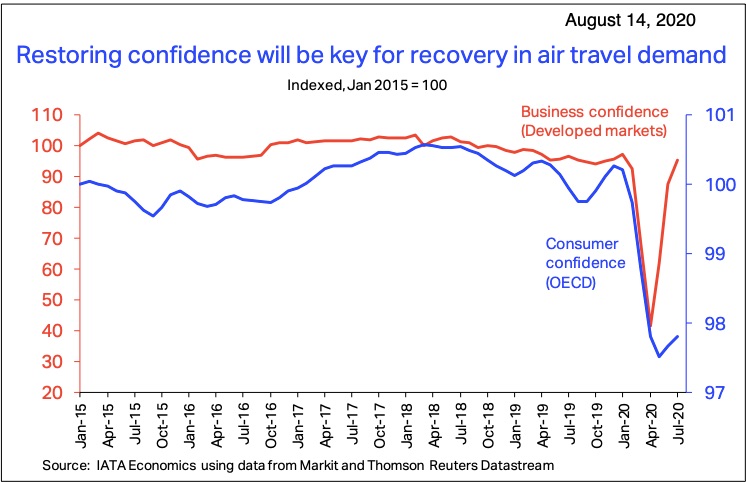 IATA also tells us that as demand gradually returns, lower fares will create lower yields and a pallid bottom line. (Yield is average fare per passenger per kilometer): 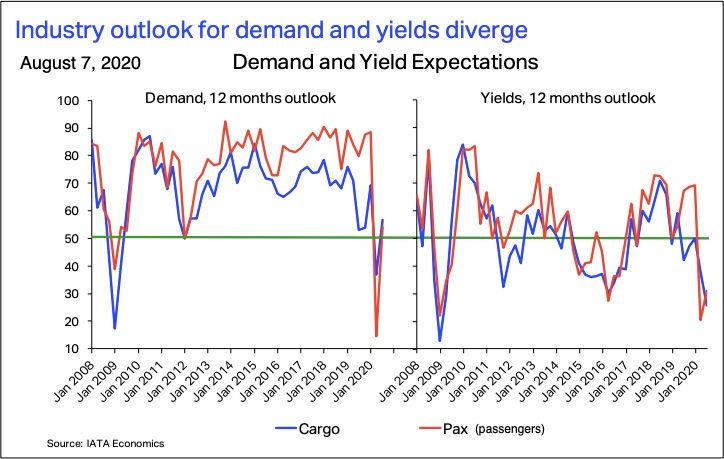 The result could be a five-year recovery with a more severe downside. (RPK = revenue passenger kilometers): 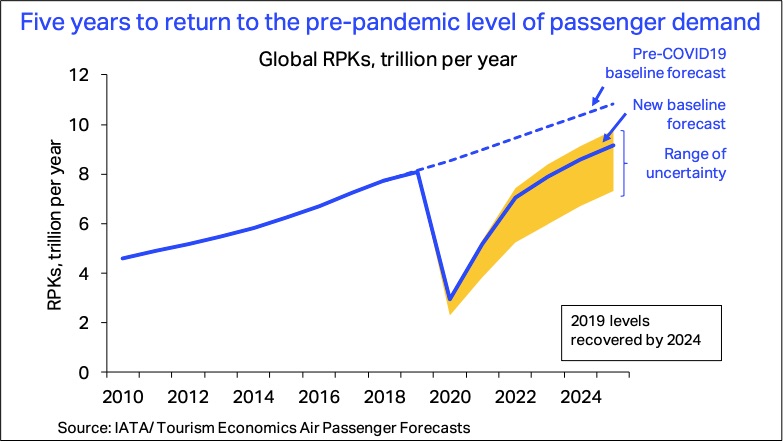 So yes, existing airfare algorithms are no longer valid. Instead, the prices we pay will convey a message about the pandemic, consumer confidence, and the dollar incentives we need to book a flight.

They also will reflect Yogi Berra’s insight that, “It’s tough to make predictions, especially about the future.” And that is why airfares have become a mystery.

My sources and more: A Scott McCartney WSJ column on airfares was excellent. From there, looking for more, I saw that the BBC and the airline industry’s IATA were ideal complements.

Please note that the beginning of today’s blog was published in a past post and our featured image is from Reuters.