How a Pandemic Changes an Airport

During June, the Dallas-Fort Worth International Airport (DFW) was the busiest airport in the world…although it really was not that busy.

Last year DFW just squeaked into the top ten. And Beijing (PEK) was near the top. Now though, with passenger traffic down by 62.6 percent during the first quarter of 2020, PEK is off the top 10 list.

Based on passenger traffic, Atlanta was the world’s busiest airport during 2019. Beijing was #2: 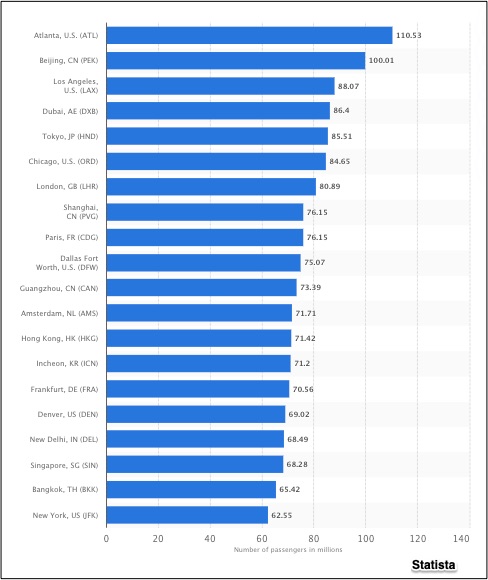 But because of the coronavirus pandemic, the industry is changing.

You can see below that the declines for the first quarter are gargantuan at two of China’s airports. However, for May, Chengdu Airport (CTU) in Sichuan Provence was in the #2 slot, trailing DFW by 86 flights: 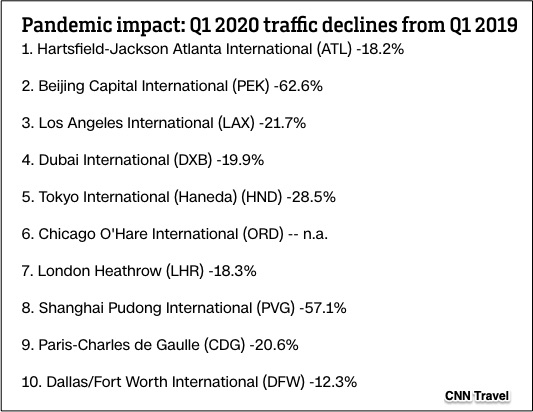 For April alone, the plunge everywhere was more obvious: 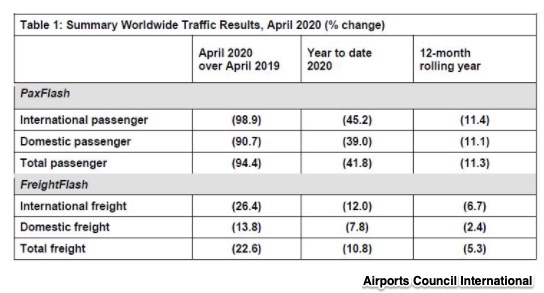 Recently though DFW traffic has picked up. American expects to move from its low of 200 flights a day to 667 during the next several weeks. At the airport, clubs reopened and the late afternoon rush is back. Furthermore, because American just expanded its schedule, they expect 100 percent utilization at peak hours (that will make social distancing impossible).

The return to “hub and spoke” is one reason for the uptick. After 1978 airline deregulation, the big airports became “hubs” where most flights landed and could get maintenance. Reflecting the “spoke” half of the system, then flights departed to multiple destinations. Point-to-point nonstop flying had yet to evolve. Now, better for filling up a plane with passengers, hubs like DFW are back. American said that DFW will become its Pacific hub for Asian destinations.

The pandemic has been expensive.

There are more employee costs. DFW hired a “strike team” of 150 cleaners for high touch areas. None of the airport’s 2,000 employees was furloughed. (But, they did get $300 million for employee retention from the CARES Act.)

Strategically placed, 300 hand sanitizer dispensers have been sprinkled throughout the airport. Meanwhile, bathroom renovations with pandemic touchless facilities will soon be completed. In addition, employees will not have to pay for Covid-19 tests and masks are required.

On the revenue side, the airport is receiving less from concessionaires that closed and from the rent reductions it offered to those that remained open, Also, landing fee payments from the airlines and terminal rents have been postponed.

April though does look better with projections at negative 45 percent. Also, they stopped work on a new terminal but continued other projects like runway reconstruction that made sense in this environment.

Our Bottom Line: Cost and Revenue

Like all other businesses, the Dallas-Fort Worth International Airport is concerned with its costs and revenue. A firm’s costs can be fixed or variable. Fixed costs are constant like runway maintenance that continues, even with vastly fewer flights. As for variable costs, employee salaries wold have been the ideal example, had they been furloughed.

Meanwhile, airport revenue can be seen as a total amount when we consider all they receive, for example, from airlines and concessionaires. To get an idea of profits, they would subtract total cost from total revenue.

My sources and more: Always interesting, WSJ’s “Middle Seat” column alerted me to the “busiest” airports. From there, Cirium and ACI had more details about air traffic as did CNN Travel. Our featured image is from the CNN article.