What Will Happen to Restaurant Food?

Celebrity chefs are different from the rest of us. Their white peaches were from Italy and their pomegranates are Sicilian.

Now though, because the demand for premium produce from upscale restaurants and hotels has evaporated, their suppliers need new buyers. One firm has tried to redeploy the food destined for one restaurant to many retail customers. But it means finding a new home for the 100 tons of fruits and vegetables that go to just one medium-sized eatery in a year. Another purveyor says that the three tons of cheese he sells a week to restaurants and caterers has to go elsewhere.

The problems at the top of the food chain resemble what we all face.

The balance in food wholesaling has shifted. Whereas demand from restaurants has plunged, supermarkets want much more.

The difference for the producers has mainly involved packaging. The large meat carcasses that went to cafeterias have to be cut up into smaller portions for supermarkets. They need shrink wrap, smaller trays, and new labels.

Also, we don’t know which came first, the chicken or the egg (sorry, could not resist), but we want much more of both. An egg producer with 25 million hens has been scrambling. Like other suppliers, they have had to redirect orders for food service customers and a cruise line that had gotten eight truckloads of eggs a week. Instead, the supermarkets want all of it.

Similarly, at a rate of 15 million pounds a day, the five-pound bags of fresh vegetables sent to fast food chains like McDonald’s and Taco Bell have been broken down. We are also buying more apples, cherries and pears, perhaps 50 percent more at six million pounds a day.

You can only imagine how that has pressured the trucking industry. Because of the surge in orders from warehouses, limits on driving hours have been suspended for food, medical equipment, and other necessities.

Meanwhile, prices are rising. Boneless chicken breasts might cost us 30 percent more. Beef prices had a 65 percent spike from March 2 to March 19. At the same time, one producer said egg prices have doubled.

You can see that beef is leading the spike: 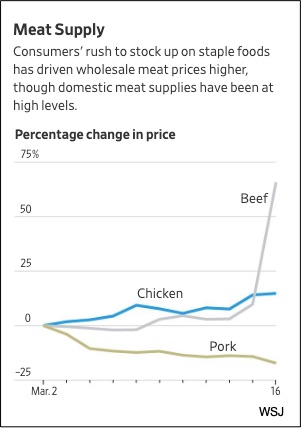 It’s all classic supply and demand. But the big action is on the demand side. The decrease in demand from restaurants shifted the curve to the left. But, a surge in demand from consumers more than offset the drop. At the same time, supply is adjusting its land, labor, land, capital to its new customers.

On a graph, you can see why prices are up. Even with restaurant demand way down, the net impact is an increase on the demand side:

At home, hopefully, many of us are enjoying celebrity chef food.

My resources and more: Sorry to keep referring to gated WSJ articles but they have been pretty good. For food redeployment, I recommend this article. Bloomberg, meanwhile, had the ideal complement.