At an elite club in Pinehurst, North Carolina, people are still playing golf…just a bit differently.

Check-in moved from the golf shop to the starters shack. At the end of a round, a “head nod” or “club tap” has replaced the traditional handshake. Also avoiding the hands, bunkers have to be flattened with your feet rather than the community rake. As for the hole, the flagstick can no longer be moved but the cup could be raised an inch. Then, players just need to tap it with the ball.

Where are we going? To how producing hand sanitizer, like a golf game, will require some new resources because of the coronavirus.

A craft distillery in Litchfield, Ct. that switched the alcohol destined for its bourbon, gin, and vodka to a production line making hand sanitizer has been getting hundreds of calls from customers. Another spirits maker said it was combining ethanol, vegetable glycerin, and hydrogen peroxide to make its sanitizer. Supporting the shift, government regulators suspended a law that required red tape.

Larger companies also have reallocated their resources. Bacardi said its Puerto Rican plant would turn out more than one million bottles of sanitizer. Somewhat similarly, in the factories that make Dior, Guerlain, and Givenchy perfumes and cosmetics, LMVH will produce a hand sanitizer gel.

This is the LMVH sanitizer dispenser. They just needed to use their water, glycerin, and ethanol: 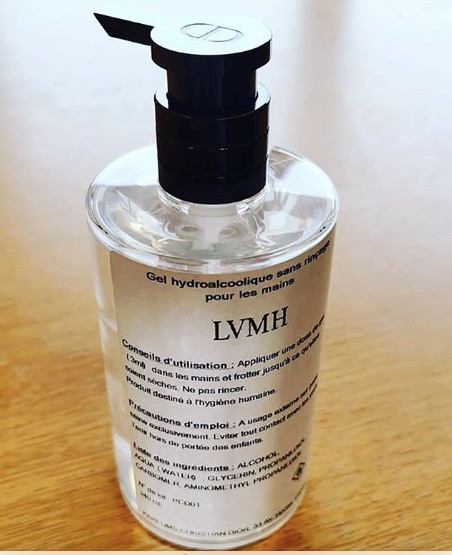 During WW II automakers churned out the tanks and planes we needed for the war effort. The switch from cars and trucks to tanks and planes was close enough for their assembly lines. Now though, the suggestion that they could make ventilators might be too distant. Repurposing the robots that make the cars might not be feasible. But an electronics maker has said it would make face masks and an office furniture company hopes to produce protective equipment.

As one academic explained, “When you are repurposing a factory, it really depends on how similar the new product is to the existing products in your product line.” She was actually describing the increasing costs shown by a typical production possibilities curve.

A production possibilities curve illustrates the maximum amount that the factors of production–your land, labor, and capital–can produce for the two items on your graph. Unlimited, the choice of items ranges from specific goods or services like wheat and barley to categories that include farm goods and factory goods. The key for us though is that the curve is bowed out. The reason? Cost increases when you change your resources from one item to another. And sometimes, as with auto companies making ventilators, you cannot switch them at all because the cost would be too great.

Below, I’ve drawn a production possibilities curve for factory and farm goods. As you move from one point on the curve to another, you are actually switching resources from the farm or the factory to the other one: 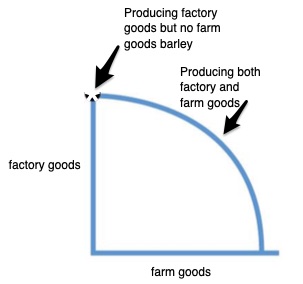 At a golf course and in a perfume factory, you can switch how you use your land, labor, and capital. And both would say it has a hefty cost.

My sources and more: From golf to sanitizer, WSJ was my destination for seeing the shift in resources as was the NY Times. Meanwhile, The Cut had a good un-gated article about LVMH’s sanitizer.

Our Weekly Economic News Roundup: From Bulls and Bears to Hundred Dollar Bills

What Will Happen to Restaurant Food?