Approximately 550,000 individuals in the U.S., and 40 million, worldwide, died because of the 1918-1919 influenza pandemic. At the time there were no antivirals nor any effective vaccines. But they did have non-pharmaceutical interventions.

Where are we going? To the impact of non-pharmaceutical interventions during the 1918-1919 influenza pandemic.

In 2007, several researchers looked at the impact of the non-pharmaceutical interventions used by 43 cities in the U.S. Their goal was to see which pandemic policy was most effective.

Cities also had to decide when to start the intervention and how long to sustain it. For the 43 cities that were studied, all selected at least one intervention:

You can see the decisions that were made: 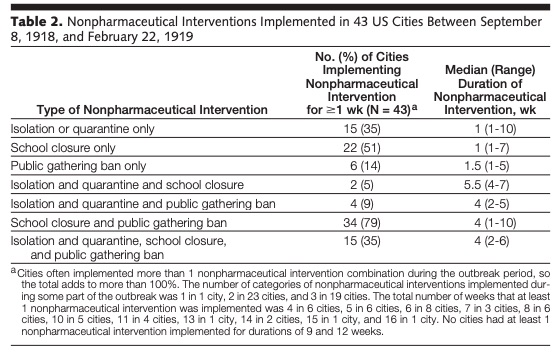 To evaluate the results, the researchers compared response times and duration of the interventions to death rates. Essentially they found that the longer the response time, the higher the death rate. The red arrow was added to the graph by Marginal Revolution’s Alex Tabarrok: 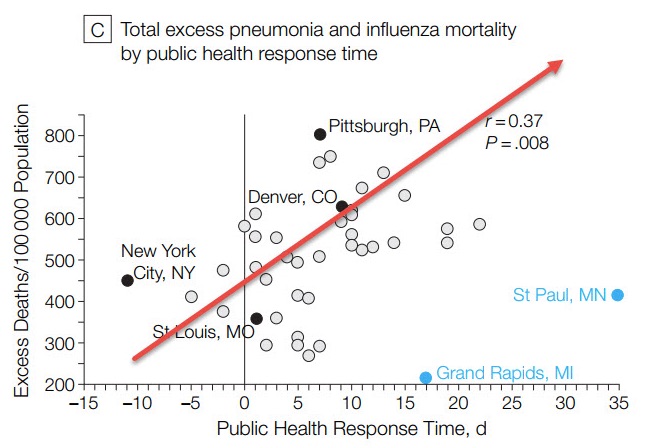 Among the 43 cities that were studied, Pittsburgh fared most poorly. It imposed a public gathering ban initially but waited 20 days after that to close its schools. Then they rescinded the public gathering ban. New York City, by contrast, had an early and a sustained use of its interventions. The city rigidly enforced isolation and quarantine rules. They also implemented staggered business hours. In the researchers’ ranking, New York was #15 of 43 cities

Below, you can compare St. Louis, New York City, Denver, and Pittsburgh. The black bars indicate the interventions: 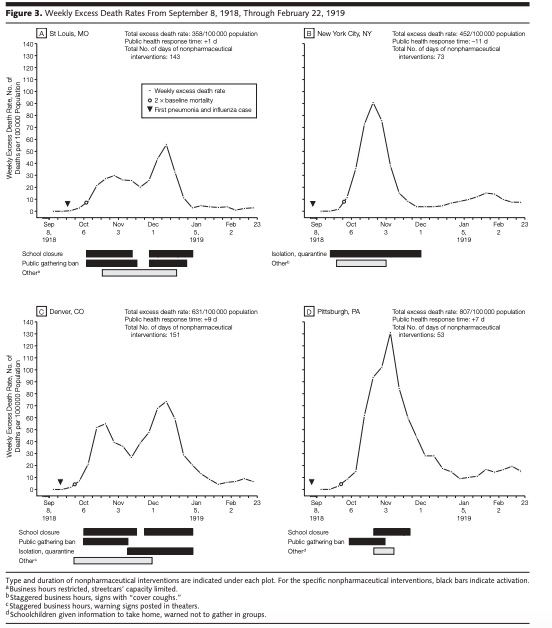 Discussing their conclusions, researchers emphasize that the impact of the interventions varied among the 43 cities. Still they believed that earlier, sustained, and layered interventions resulted in a reduced death rate, a delay in its peak, and lower peak mortality. They suggested that non-pharmaceutical solutions do work.

As economists, we can look at pandemic policy tradeoffs.

An opportunity cost chart is a handy way to focus on the tradeoffs required by a decision. It names the opportunity cost–the sacrificed alternative–and the benefits of each alternative. It reminds us that looking back, we cannot name the consequences of the choices. To make a wise decision, we can only identify the current tradeoffs.

The following framework for a college decision can also be used to understand pandemic policy tradeoffs. Below, you can see that first you identify the alternatives. Then, you name the benefits from each one. The key to remember is that when you choose one alternative, you sacrifice the other alternative and its benefits.

Below, the decision is to attend college. Getting a job is sacrificed as are its benefits: 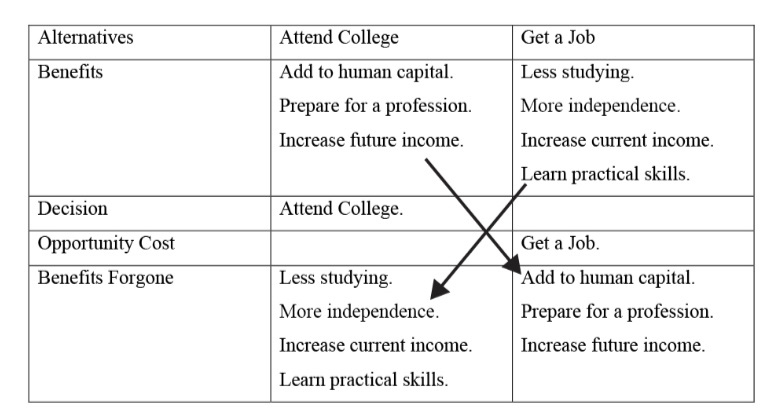 Similarly, at each stage of preparation for a pandemic, we have to select our tradeoffs based on what we know. Assume for example that we have to choose between closing schools and not closing them. One benefit of closing is optimizing health when and if the pandemic hits. At the same time, a benefit of keeping schools open is minimizing current disruption.

For the 1918-1919 pandemic, the cities that selected the most disruption at the earliest possible time could not have known then that they would be minimizing the number of deaths. Still, they wound up making the wisest tradeoff.

My sources and more: Thanks to Marginal Revolution for alerting me to the 1918-1919 pandemic paper  (the source of all pandemic graphs and tables in today’s post).

All We Need To Know About Toilet Paper (Shortages)

The Economic Indicator That Coronavirus Can Create