A Global Look at the Rule of Law

During the 1790s. Alexander Hamilton told us that our economy needed to recognize the sanctity of a contract. At the time, Revolutionary War bonds had been sold to speculators by the investors who had supported the War. When the bonds appreciated in value, those speculators benefited–not the patriots who initially purchased them. Hamilton told us that legal transfer of ownership had to be respected. Our economic future depended on contractual rights being preserved.

Still today, a rule of law that includes contractual rights exists as the foundation of a viable economy. Let’s see where.

The Rule of Law

The World Bank says that its rule of law (ROL) indicator includes property rights and contract enforcement. It also extends to the police, the courts, and the likelihood of crime and violence. It involves the extent to which “agents have confidence in and abide by the rules of society.”

The brighter green countries are the most committed to a rule of law. They include New Zealand, Canada, Australia, Greenland, the Scandinavian countries, Denmark: 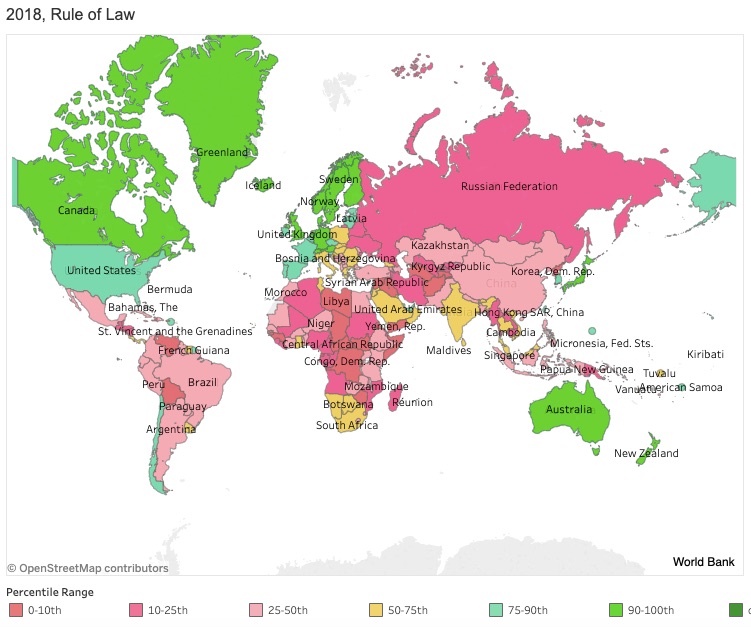 Again, for the control of corruption, using the above color scale, you see similar shading: 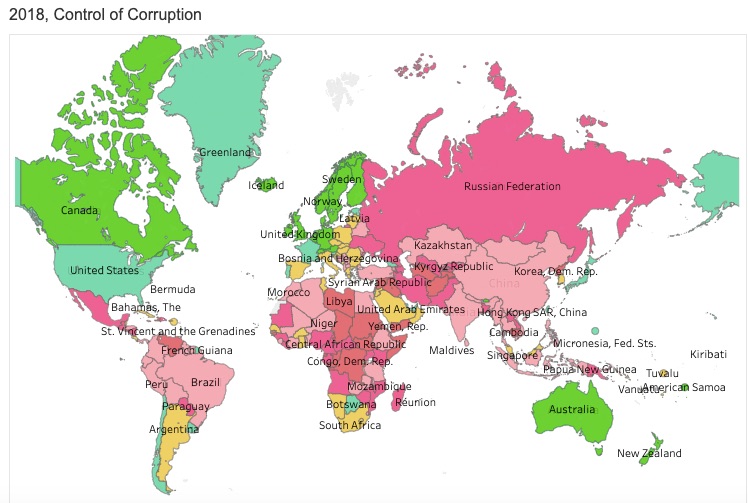 According to the World Bank, the United States ROL rank has sunk during the past several years:

In Why Nations Fail, economists Daron Acemoglu and James Robinson explain why the rule of law matters. Early in the book, they set the scene by comparing Nogales, Sonora and Nogales, Arizona. They tell us why the rule of law made Nogales, Sonora so much less affluent than its Arizona namesake. In Mexico, you can ascend economically by untangling red tape, paying for expensive licenses, and bribing politicians. In Mexico you have an amparo–the right to appeal that a law does not apply to you. On the World Bank map, you can see Mexico is a bright pink, placing it high on the corruption scale.

Somewhat similarly, we can think of China’s lack of intellectual property protection. We also can look at Poland and Hungary where independent judiciaries are in question. With a weaker rule of law, political influence rather than the market can dominate decision-making.

Returning to where we began, Alexander Hamilton’s sanctity of contracts takes us to economic development in the U.S., Mexico, China, and Eastern Europe. But here we have to add one word: incentive. When we have the rule of law, the incentives encourage financial investment, entrepreneurship, and business formation. They form a foundation of legal guarantees that we need for economic development.

My sources and more: Although it is a bit complex to navigate, the World Bank is a superb source of governance data. I also recommend the insight offered by a Harvard scholar in this Marketplace podcast and a BBC lecture from Niall Ferguson. But, if you have lots of time, do read Why Nations Fail and The Narrow Corridor  by Daron Acemoglu and James A. Robinson.