In Denmark, new parents can get as much as 52 weeks of paid leave, universal day care, and a cash subsidy for each child. Government also provides for two years of unemployment benefits, a university education, and elder care.

Let’s take a look at how they pay for it.

We can start with the kinds of Scandinavian taxes. One big difference between the Scandinavian countries and the U.S. is their consumption tax. You can see that it (in orange) is a much larger proportion of their tax burden than ours.

Across the top, the graph also compares the tax burden to each country’s GDP. For Denmark, the tax to GDP ratio is close to 45 percent. For the U.S., at 24.3 percent, it is much lower: 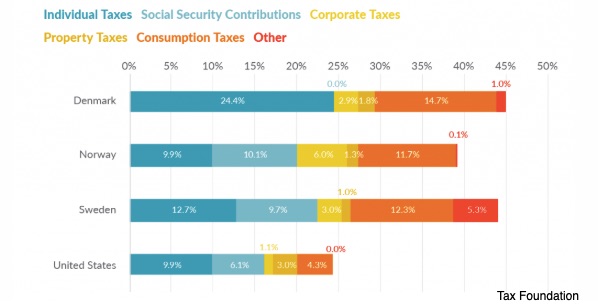 Called the VAT (Value Added Tax), the Scandinavians’ consumption tax is levied during production. A pretzel that is subject to the VAT would probably have been taxed as wheat, as flour, as a pretzel, and then in the supermarket. At 25 percent, a VAT can add up to a hefty amount and yet be somewhat hidden. The U.S. equivalent is a sales tax on certain items that can go to a federal or state government: 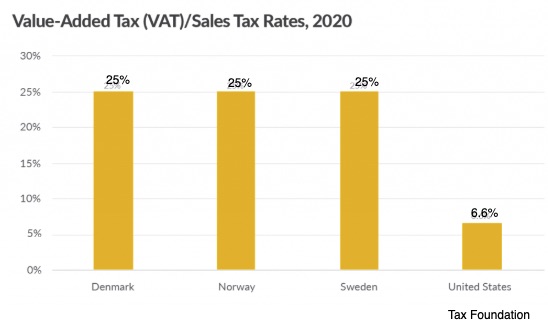 As you might have expected, Sweden’s (57.1%) and Denmark’s (55.9%) top tax rates are higher than U.S. rates. (At 38.4%, Norway  has a lower top rate than the U.S.) But there is another less obvious difference. Denmark’s higher tax rate is paid by people who earn more than 1.3 times the average. If that dividing line were in the U.S., people earning $65,000 would pay the highest rate. Similarly, in Norway and Sweden, groups that earn less pay more: 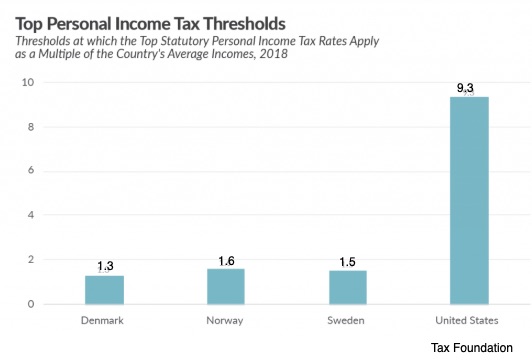 Here, Denmark has no payroll tax that would be comparable to what we pay in the U.S. But the rate in Sweden and Norway is higher than ours: 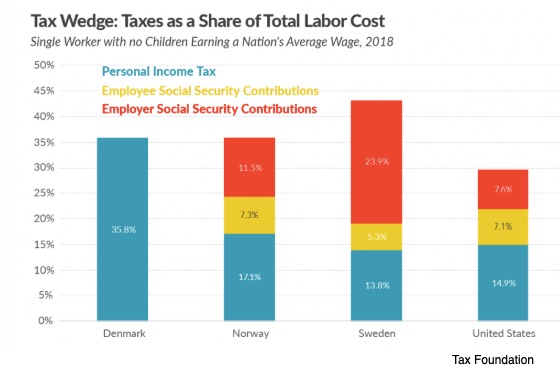 Corporate taxes are higher in the U.S.: 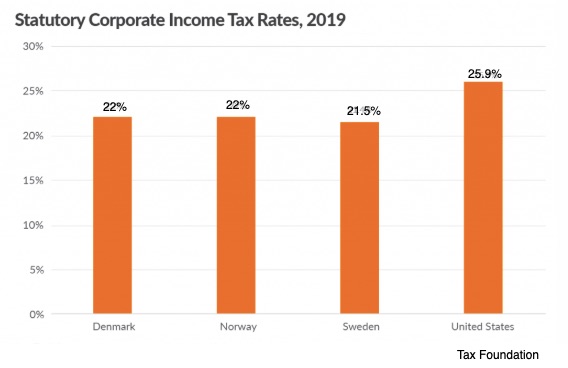 Our Bottom Line: Types of Taxation

Whether looking at Scandinavian taxes or the U.S. we wind up with three categories: progressive, proportional, and regressive.

So, do we want to be more like Scandinavia? The big tradeoff is the taxes.

My sources and more: You can see that I got all of my tax information from the Tax Foundation. However, there are lots more tradeoffs. For other costs, you might want to look at this comparison of Cuddly and Cutthroat capitalism and at Denmark’s Education caps, On the other hand, for more benefits, this WEF article focuses on work hours. And, for some surprises, this paper looks at mobility.

A Global Look at the Rule of Law