The story really starts (during the first time) when our banking system almost failed. On this Throwback Thursday (#TBT), Morgan Stanley’s E-Trade deal reminds us of the 1930s.

In 1933, the financial world seemed to be unraveling. A stock market crash, a plunging GDP, 24.9 percent unemployment, and a slew of bank failures were only some of the crises. One response came from the Senate Committee on Banking and Commerce. Led by a fierce special counsel, Ferdinand Pecora, the committee held hearings that started during May 1933. Their goal was to preserve the banking system by redesigning it.

To expose the massive conflicts of interest in the banking system that had made it so vulnerable, Pecora subpoenaed industry leaders like J.P. Morgan Jr. Morgan’s father had created the J. P. Morgan & Co. colossus that was both an investment bank financing businesses and a commercial bank that held deposits and made loans. J. P. Morgan was the banker who created the first billion dollar corporation when it formed U.S. Steel from 33 companies. He helped to fund and then restructure the U.S. railroad network. You get the picture. Just imagine J. P. Morgan standing at the top of the financial world. After he died in 1913, the son took over the family business.

Below, you can see images of J. Pierpont Morgan, Sr. and the names of the firms that combined to form J.P. Morgan & Co.: 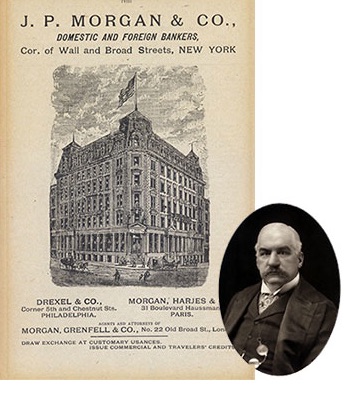 The banking collapse of the 1930s was partially caused  by the diversified investment services that had brought more business to financial institutions like J.P. Morgan. Revealed by Pecora, banks had a debilitating conflict of interest. The funds given to their securities affiliates for questionable investments, chancy stocks, and speculative bonds resulted in the abuse and loss of their depositors’ funds.

The Glass Steagall Act had the solution.

The conflict of interest facing banks with securities affiliates would be eliminated by prohibiting banks from having these subsidiaries. As of 1933, banks had one year to divest themselves of securities and investment banking activities. It meant that they could buy and sell securities only pursuant to a customer’s instructions, they could no longer underwrite securities, and J.P. Morgan had to become two institutions. The commercial banking half remained J.P. Morgan & Co. while Morgan Stanley became the entirely separate investment bank.

Perpetuating safety but also limiting competition, the system started to crumble 40 years later. Nine years after the repeal of Glass Steagall, in 2008, Morgan Stanley got a bank holding company charter. In 2020, Morgan Stanley said it would buy E*Trade. Known as a discount broker for dot.com day traders, E*Trade has five million retail customers and an online bank.

Sounds like we are back to where we started?

Financial institutions play a hidden role in our everyday lives. Called intermediaries by economists, they link the people with money to those who need it. They eliminate the need to find an individual who will pay for your house, your car, or your new factory. Banks are the go-to places for storing your money, paying your bills, and funding your business ventures.

My sources and more: WSJ, here and here had the E*Trade facts. But my most interesting read was from Vanity Fair on the 1930s. Also, in a series of images, JP Morgan Chase has some of its history.

Several sentences in today’s text came from a previous econlife post and also from my textbook, Our American Economy (Addison Wesley).