Imagine a woman in a 20-year marriage who is approximately 50 years old. Then switch to a man in a similar situation.

They are no longer similar when each gets a promotion.

Divorce is more likely for a woman in a traditional marriage who wins an election as a mayor or member of Parliament than for a female who lost. In traditional marriages, the focus tends toward an older husband’s career relationships who earns more. Consequently, a woman’s election victory would require that roles be renegotiated. With the promoted women earning more and spending more time away from home, the couple would need to figure out new domestic roles. They could also have to acclimate to a different balance of power and social norms that deviated from their past. Soon, each partner enjoys less utility from the match.

Below, the dotted gray line displays that more of the non-promoted female politicians remained married:

Before a promotion, the wives–not the husbands– would have utilized more than 80 percent of Sweden’s 480 day paid parental leave option: 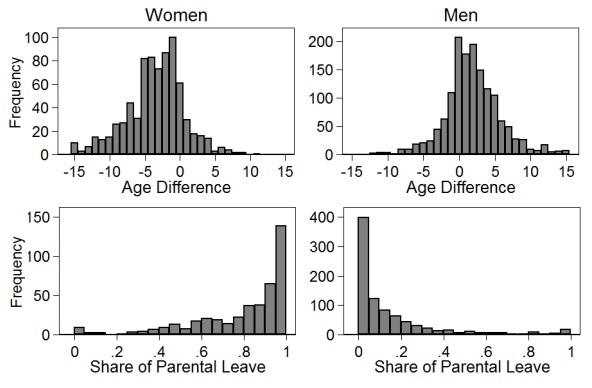 The data about promoted female CEOs resembled what researchers saw for politics. The only difference was that they did not have the facts about a non-promoted group. They did know though that women were more than twice as likely as their male counterparts to divorce: 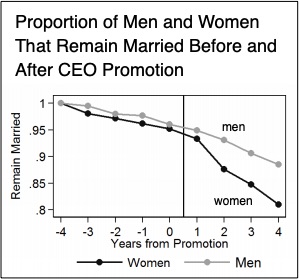 So yes, for women, success can create friction in a marriage while for men it does the opposite. The result is a tradeoff.

Because the women who ascend to top jobs have higher divorce rates than those who do not, they wind up with a choice. Defined as the next best alternative, the opportunity cost of a decision is what you sacrifice. For highly successful women it could indeed be marriage. For men, we have the opposite. A top job and a more stable marriage correlate.

Let’s conclude by asking about the impact of the tradeoff. I know we are taking a causal leap but still we can ask why, in 2017, 94 percent of the CEOs in Forbes 500 firms were male and 77 percent of the parliamentarians in the world were men. Maybe the marriage tradeoff has too high an opportunity cost for many women. But then we wind up with a self-perpetuating cycle in which the income and status gap are preserved.

My sources and more: Thanks to Marginal Revolution for alerting me to a recent Swedish study on women, power, and divorce. All graphs are from “Single Ladies, Job Promotions and the Durability of Marriage.”

How Eating Less Popcorn Is Like Smoking Fewer Cigarettes